“They don’t have a clue about you and me,” sings doggie couple Pongo and Missis about their humans. This sly song kicks off Imagination Stage’s top-notch musical production of 101 Dalmatians, establishing at the start that this story is going to be told from the dogs’ point of view (as in the original novel by Dodie Smith). Humans are ingeniously cast as oversize puppets with large papier mache heads; they are the clumsy and clueless ones here, to be humored with silly pet 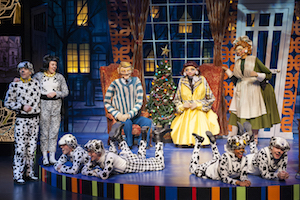 The classic tale begins in Regent’s Park, London, where Pongo and Missis are leading their humans, Mr. and Mrs. Dearly, on a walk. It turns out Missis is pregnant, which the happy couple announce to friends via the efficient Twilight Barking network (so THAT’s what they’re doing!). The scene when the puppies arrive is whimsically staged and one of the cutest parts of the play.

But then the dramatically coiffed furrier Cruella de Vil makes her appearance, in a red Jaguar that actually drives onto the stage. She dreams of making a new line of spotted fur coats so she has her henchmen, the Badduns, kidnap the puppies and take them to her Haunted Hall in Suffolk. Pongo and Missis set off on the long journey to Suffolk to rescue them. The trek is cleverly indicated by maps and illustrated scenes that light up as the dogs go from city to city, rendezvousing with helper friends along the way, including an Irish setter, a border collie, and a boxer. A dog and cat pair, known just as The Colonel and Lieutenant, steal the show with their mix of simmering flirtiness and no-nonsense British resilience.

Though there are moments of anxiety where it looks as if Cruella might succeed in her wicked plot, things end on a happy note with parents, puppies – and 94 new puppy friends – all back home in time for Christmas.

My eight-year-old daughter said she really enjoyed the individual dog characters, especially the puppy entranced by TV. I could sense her attention flagging a little in the middle section of the play, after the kidnapping but before the rescue. And she said she was a little disappointed there weren’t actually 101 Dalmatians onstage. But I thought the staging was really effective in conveying their numbers. And the script is witty enough to keep adults entertained as well as kids.

With its lessons of being brave and appreciating home, 101 Dalmatians is a fun, music-filled alternative holiday show for adults and kids ages 4 and up.