The Cox Fields of Fear is all set to start on Sep 24 this year!

The definition of creepiness: the evil clown in bright neon orange, looking right into your eyes, hissing: “We miss you already.”

Here’s our experience from last time:

For the third time in four years, the Our Kids review team entered Cox Farm’s nighttime spook-fest, Fields of Fear. Our expectations had been lowered last year when the fright level had been tempered by the need to appeal to all ages and (perhaps) a concern for making sure the legal disclaimers were adequately conveyed. This year, however, there was a much better balance between having non-scary activities and attention to safety (and legalities) and some good, old-fashioned scary moments.

This year’s team was a good mix of veterans and newbies – three 12 year olds and three 15 year olds.  All six had genuine moments of startle and fear. All of them had fun. 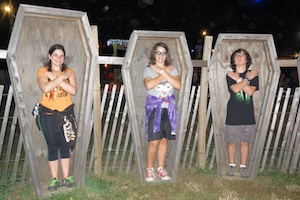 Some aspects have not changed.  Our recommendation is to save the Hayride and the Cornightmare for the end since those are the two major attractions that make the nighttime experience at Cox Farms different from the daytime.  Instead, we chose to veer left upon entering the gates and made our way down the twinkle-lit path to the Fire Grounds with the torch-lit slide.  The daytime “Dino-Slide” seems all the more fun at night – and the guests can get a good look over the darkened corn field and hay ride area with anticipation. The party carport pavilion with the pounding dance music also provided a good release of nervous energy – as well as a chance for the young adults to dance and socialize.

The games area was the least interesting – in part because the activities are so similar to those offered in the daytime and in part because they had no fear factor.  One new attraction, the Extreme Jumper, looked like an excellent way to throw off energy (cost: 5 Cox Dollars). Another new attraction, the Cow Tipping station, for some reason, had the kids coming back several times.  The entire group put its efforts in the tractor pull (5 Cox Dollars) and the Power House (4 Cox Dollars).  From the adult’s perspective, these activities were not worth the expense since each Cox Dollars is roughly equivalent to $1 each (with minor discount for buying in bulk). 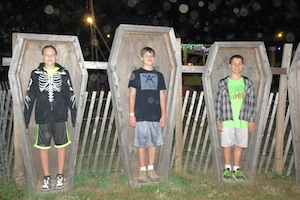 The scare factor increased however with the Buried Alive attraction next to the games area.  For 4 Cox Dollars, a guest can be enclosed in a regular-size casket, which then bumps and thumps for minutes on end, all the while a video camera is trained on the person.  This is mesmerizing for the crowd that gathers around to see if the person has a panic attack.  After the ride ended for the only willing victim, the crowd of 25 to 30 people immediately dispersed, and there were no other takers for the claustrophobic experience.  The only recommendation to Fields of Fear folks – the camera should be trained at the rider’s face straight on – this time it was a ‘long shot’ – so the audience couldn’t fully appreciate the level of anxiety the rider was experiencing.

We did not see the Autopsy Room which last year was very popular with the young adults since it had had a good ‘ickiness’ quotient.  If that feature has been permanently removed, we’d vote to bring it back. The Dark Side Hayride did not disappoint this year.  The twenty-minute tractor-pulled hayride has been refocused as a Zombie Zoo.  Gone are campy distractions such as the alien invasion encounters.  This was a good decision, even though it meant that we didn’t reach the first fright point until several minutes into the 20 minute ride.  Surprisingly, the ride omitted the ‘quiet’ stops – the creepy lullaby vignettes – and focused on the startle moments, although, objects being dropped down from the overhead were also noticeably absent.  Unlike last year, the characters were allowed to lightly touch the guests. The entire review team agreed that the scariest moment of the evening occurred on the hayride – and that we may never trust a chain link fence again. 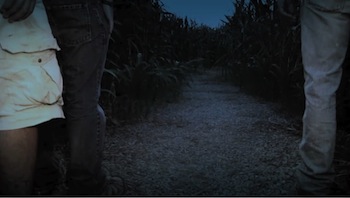 The ultimate attraction, however, is Cornightmare, a directed ‘maze’ in the darkened cornfield which is disorienting and truly off-putting at times.  This year featured a new route and good mix of predictable scare points with startle moments.

One caution to guests: there are several times that strobes and disorienting lights are used, at both the beginning, in the Vortex (the first ‘stop’ inside the school bus), and in the end.  If you have issues with motion sickness, light sensitivity or seizures, you should ask the attendants which stops you should avoid. Likewise, at more than one point, there are sensory experiences that make you feel as if the walls are caving in.  These are brief in time but could be very scary for people who are claustrophobic.

And then there are the evil clowns, which unlike last year, seemed to have more latitude to interact with the guests and follow them (and hiss at them) seemingly forever.  To Cox Farms: “Well Done.”

One thing to keep in mind, the Cornightmare is a ticketed event – one entry per ticket (for an additional price to the basic admission).  The OK review team does not recommend doing this first because the rest of the visit will seem anticlimactic.  The entries are timed in groups; you can go through when your group number is called (similar to Fast Pass at Disney) or with later groups (just not before).

After the Cornightmare, we decompressed by walking the Firegrounds which has several small bonfires. Marshmallows for roasting can be purchased and the kids enjoyed the chance to just hang out. We were lulled into watching the excellent fire dancers while sipping hot cider and eating kettle corn ($9.50 for a large bag; $6.00 for a regular bag; $2.75 for cider). The kids enjoyed scribbling chalk graffiti on a dilapidated car with dance music blaring out of its trunk and just hanging out taking in the lights from the fire.  After a few more slides on the torch-lit slide, just to throw off the nerves, we headed home, exhausted and happy.

As with previous years, we wish there were just one more major attraction, such as a haunted barn, a ghoul makeup station or a more intricate fire-dance show, to cement the Fields of Fear experience.  As it is, once the guests have run through the Cornnightmare and hayride, there is not much more for fear-seekers to experience.  With one more attraction, on the dance party pavilion side of the grounds, it would be a more satisfying experience and would have a reason to keep us on the grounds just a little longer.

Advice to parents: some of the attractions, notably the Buried Alive, the Cornightmare and the Dark Side Hayride, have genuinely scary moments. These may not the best choice for young children unless you want to be sidelined.  Fields of Fear is not recommended for children under 12, the median age the Saturday night we attended appeared to be 15 to17.   Children under 14 must be accompanied by an adult over 18.

A Fear Basic ticket is $13 per person and includes entry into the Firegrounds and unlimited Dark Side Hayrides but does not include admission to the Cornightmare.  The Fear Plus ticket is $19 and includes Firegrounds admission, unlimited hayrides and one entry to the Cornightmare.  Tickets can be purchased online and at the door. In planning a visit to Fields of Fear, visitors should spend time on Cox Farms’ website which gives detailed information regarding admission procedures, age restrictions, and inclement weather policies.

Fields of Fear is open Fridays and Saturdays in October from 7:30 to 11:00 p.m. (last entry: 9:30 p.m.)  Be sure to become a Fields of Fear Fanatic and receive special offers and discounted tickets.