New York is one of the most exciting cities in the world, and it’s never too early to introduce your child to little bites of the Big Apple.

A couple months ago, I spent two nights there with my girls, six years old and six months old. I also took along our babysitter and a friend visiting from Europe (extra helping hands!).

We drove up early on Easter Sunday morning and there was very little traffic. I also had EZ Pass, which made getting through tollbooths a breeze.

Even though it was too early to check-in, we were able to have our car parked and our bags stored at our midtown hotel, the Muse. The hip bathrooms off the lobby at the Muse don’t have a changing table so we changed baby’s diaper right from her car seat stroller. It would not be the first time we’d have to do this on this trip. (Family Travel Tip #1: Improvise!)

Then it was off to see the Easter Parade along Fifth Avenue, which was closed to traffic from St. Patrick’s Cathedral on E. 50th Street up to Central Park for the parade. This isn’t a parade with marching bands and floats, it’s more an informal stroll, with people walking along in quirky and elaborate Easter hats. The coolest ones drew photo-snapping crowds around them. We saw sculpted paper hats, hats with fruit on them, even a Pride and Prejudice hat (Keira Knightley version). Women and their little dogs were there in matching feathered hats. Street vendors sold bunny ears so we got my daughters a pair each. The fancy Fifth Avenue stores were mostly closed but it was fun to peer into the windows of Saks and Tiffany & Co. and Henri Bendel.

We walked all the way up to Central Park, which at 843 acres is a weekend’s visit on its own. It has 21 playgrounds, a zoo, a vintage carousel, boating on ponds, and even an Alice in Wonderland statue. We let my kid scramble on rocks and watched the horse-drawn carriages drive by.

Lunch was at a longtime burger joint. No, not the famous Shake Shack, whose Theatre District location I noticed had a line down the block. Because Family Travel Tip #2 is “Avoid lines whenever you can,” we ate at line-free-but-still-pretty-busy Burger Heaven on E. 53rd. (There are two other locations in Manhattan.) I liked that Burger Heaven has been family-owned for four generations. The burgers were juicy, tasty, and perfectly cooked. The place was very family-friendly, so I didn’t understand why, in the restroom, they’d install the new power hand dryer next to the changing table. It made diaper-changing traumatic for both baby and mama.

On our way to Madame Tussaud’s we passed through Times Square. The head-spinning, eye-popping jumbo video screens never fail to amaze. But current street construction detracts from the general awesomeness of the place. There are also cartoon characters milling about: cut-rate Hello Kitty, Bugs Bunny, Dora. They look enough like the licensed characters to draw your kids’ attention but they aren’t associated with Nickelodeon or Sesame Street or any other company. If you take a photo with them, they expect a tip. The Elmo we encountered practically grabbed my kid and, after I reluctantly took a photo, was pushy about the tip. But my kid was thrilled to have her photo taken with Elmo.

At Madame Tussaud’s I used our New York Passes for the first time. (See “What to Know” below for details on this discount card.) The NY Passes let us skip the main ticket line and use a shorter VIP line. (See Family Travel Tip #2 above.) Once inside the multi-level attraction, everyone was impressed with the lifelike wax figures of movie stars, sports heroes, musicians, and presidents. When my 6-year-old recognized someone (President Obama, Taylor Swift) she got really excited. But even if she didn’t know who the celebrities were, she enjoyed posing for campy pictures next to them. A whole section is devoted to New York icons, like the Statue of Liberty and a yellow NYC taxi cab. There’s a dark, scary section with horror movie characters, but you can bypass this area through a neighboring door.

By then, it was time to check-in at our hotel. The Muse is a Kimpton hotel, a boutique chain that I like for its style and sense of fun. As a member of their free guest rewards program, I got showered with goodies at check-in: a free in-room movie voucher along with a bucket filled with a bag of popcorn, nachos, and Raisinets; a $15 raid-the-minibar credit; and most importantly free wi-fi. My daughter received a gift bag with a coloring book and a kid’s guide to Times Square, crayons, and a bubble shovel, as well as an Easter bucket with chocolate-filled plastic eggs, a chocolate carrot, and bunny ears (her second pair that day).

Family Travel Tip #3: Try to pick a hotel that offers room service because sometimes at the end of a long day of sightseeing you don’t want to have to go out again to find someplace to eat.

The next morning, we headed down Sixth Avenue to the Empire State Building. Family Travel Tip #4: Any walk between point A and point B will result in detours to random stores, playgrounds, or escalators that catch your kid’s eye, so be willing to adjust your schedule accordingly.

Our detour took us to the Bead Center (989 Sixth Ave.), a must-visit if you have a crafty kid. It’s packed with every imaginable bead you could want, in all shapes and sizes and colors, arranged in neat rainbow rows.

The lobby of the Empire State Building is surprisingly not that large, but it’s a beauty with its marble and Art Deco design. Not surprisingly, getting to the 86th Floor Observatory for its famous city views involves waiting in lots of lines: ticket line, security line, elevator lines. If you have a City Pass (similar to a New York Pass, see “What To Know” below), you can bypass the ticket line at least. The security control is similar to an airport’s, except you don’t have to take off your shoes.

Along the way, there are upgrades you can buy if you want. An extra fee gets you to the 102nd floor observatory, or Express Pass access (let’s you jump to the front of all lines), or entry into the New York Skyride (a 30-minute, theme park-like movie attraction that simulates an aerial tour of New York’s landmarks). The New York Skyride is included free with the New York Pass but we skipped it.

At the ticket booth, a helpful digital display indicates how far visibility is that day on both the 86th and the 102nd floors (5 miles on the day we visited).

On the way to the escalators, the line passes through an official photo-taking point. It’s free to have your photo taken. You get a ticket with a number on it and, on the way out, you give the ticket to a staffer who locates your picture. You can buy it for $20. (We didn’t.) 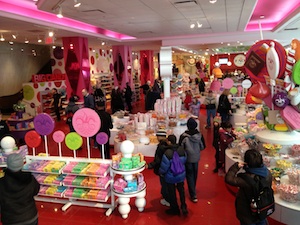 Strollers are allowed up to the observatories but note that the elevators are not all that roomy. And once you get up to the 86th floor, the outdoor section of the observatory is crowded and narrow so having a bulky car-seat stroller like ours was hard to navigate. Families that had slim umbrella strollers had an easier time getting around, I noticed.

But once you finally make it to the 86th floor, you might not notice much else except the inspiring view of Manhattan spread out below you. It can definitely be windy that high up so it’s useful to have light jackets ready. My daughter tried out those hulking binoculars that swivel around but she couldn’t figure out how to see anything out of them.

After we’d taken our fill of pictures, we headed back down, once again encountering lines for elevators, though they seemed faster-moving this time. The way out of the building passes through the gift shop and we ended up buying T-shirts and a Christmas ornament.

After a late lunch, we cabbed down to lower Manhattan, thinking we’d visit the 9/11 Memorial, but the line to get in was too long so instead we went nearby to discount heaven Century 21, where you can buy designer clothes, linens, bags, and shoes for half off or more. Once again, there were lines: for the dressing rooms, for the cashier. My daughter is a budding shopping diva so she didn’t mind the time we spent there, but this New York experience isn’t for everyone.

Our last morning in New York we visited the FAO Schwarz flagship store on Fifth Avenue. This legendary toy shop, the U.S.’s oldest, is now operated by Toys R Us but it still has a special air about it. On the ground floor you’ll find giant stuffed dogs and a candy shop worthy of Willy Wonka, including oversize versions of your favorite candies. On the upper floor is a Barbie section, a doll section (including a nursery with newborn baby dolls), Matchbox car sectionâ€”and the piano dance mat made famous in the movie Big. (More recently, the store featured in the film The Smurfs.) Kids and adults line up to try out their own moves on the piano mat for free.

Loaded down with bags, we decided to make our break from New York, knowing there’s so much more to see on future visits.

The key to a successful family NYC trip is planning. If there are certain things you and your family definitely want to do – watch a Broadway show or have tea at the American Girl Place – you should book those tickets or make those reservations ahead of time and then plan the rest of your itinerary around those events. The other key to success is being willing to let all your planning fall by the wayside to allow your kids to run loose at a random playground or to linger at a cool shop you come across.

If you plan to visit New York’s greatest hits, a City Pass or a New York Pass could save you money and time since it often lets you use a fast track line to avoid the crowds. Each pass offers entry to different attractions so study both before deciding which one works best for your family.

Want to see Matilda, Annie, The Lion King, or another Broadway show? You can book full price tickets via the theater’s website, but for discounted tickets, check out broadwaybox.com for discount codes that you can use when booking or the TKTS booth at Times Square for half price tickets the day of the performance. TKTS has an iPhone app you can use to see what shows are available that day.