Take 125 years of exploring the world and package it into a museum exhibition. Unleash a couple boys in the galleries, and you’ve got a recipe for a fantastic outing. My sons, 3 and 7, and I spent nearly two hours meandering through A New Age of Exploration, the National Geographic Museum’s exhibit celebrating the Society’s 125th anniversary. While it’s not a huge exhibit, the content is rich, providing not only a look at amazing discoveries, but also the background of the discoveries. 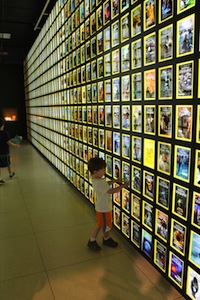 National Geographic is known for its vivid photography, and the magazine’s stunning covers wallpaper the exhibit’s first room, which drew my kids right in. “A scuba diver!” “The first cover ever!” “Look at this one!”

The next room includes cameras and gear (behind glass) that photographers and explorers have used, and a couple of wow-worthy items: a giant dinosaur skull (found in the Sahara) and a colossal stone head unearthed in Mexico (dating back 15 centuries). There’s a large amount of text throughout the exhibition, but children with short attention spans can also grasp the items’ significance without a ton of reading by only reading the captions or getting explanation from adults.

The centerpiece of the following room is an 11-foot-diameter globe. A few iPads stationed by the globe allow for swiping your way around the world, which had my older son zooming in on our town as well as several countries he’s learned about. Ocean exploration is also covered in this room. My kids loved peering through a window of a model of a deep sea submersible like those used a long time ago. But they really wanted to be able to climb into the roughly six-foot-tall sphere. A wall of more than a dozen underwater photos with succinct captions kept my younger son’s attention and had my older son recognizing names such as Jacques Cousteau and Sylvia Earle.

Projected on one wall is a section of a massive sequoia tree. A kiosk in front of it encourages you to “climb” the tree (as a real explorer did) and learn facts about it on your ascent. It gave me a slight feeling of vertigo to watch the video roll from one part of the tree to the next. Each of the handfuls of tree sections includes text about the massive tree. The photographer used 126 photos spliced together to be able to show the tree. We were a little disappointed that our climbing role only involved pressing a button (we thought maybe our image would be shown climbing a tree as we pulled at the air in front of us), but the kids enjoyed it. They also had fun making shadow puppets on the screen.

The last section of the exhibit focuses on animals, with wildlife videos playing on a 12-panel TV. This section also includes three interactive features. My kids were fortunate that the museum was not crowded on our visit because it meant they could play a Kinect video game for a good chunk of time. You see yourself on the TV in front of you, but your head and hands take on animal parts. The object of the game changes depending on which animal you are, but most of the time you are trying to grab and eat other animals. Both kids loved the game. 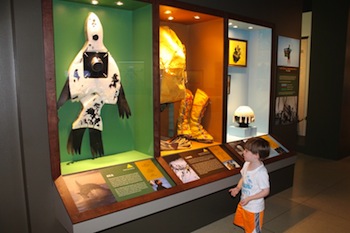 Nearby there is an iPad with a short geography quiz (my 7 year old knew a few answers; I knew the answers or could make good guesses on almost all) and a display of National Geographic Kids books and magazines. Across the way, there is a small exhibit on the role of television in National Geographic’s history. We relaxed on a couch while checking out three flat-screen TVs, each with a different documentary from the 1960s/’70s; the 1980s/’90s; or the 2000s.

The very last part of the exhibition asks visitors to type a suggestion for research or exploration. A “word cloud” on a neighboring screen highlights your suggestion in yellow amid dozens of words in white.

At the end of our visit, I realized almost two hours had passed. We were in no rush, and with so few other visitors, we could linger at the interactive spots. However, I think an hour visit is more likely for most visitors with children as this is not an enormous exhibit.

Overall, the interactive aspects of the exhibit were nearly all electronic, and I would have preferred some hands-on features, especially for my younger son. When we left, he was still wishing he could climb inside the small submersible. But this show succeeds as a way to learn about exploration, see some amazing photography, and almost cure wanderlust. 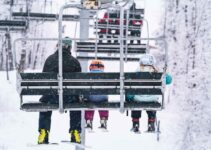