Arnold Lobel’s simply told stories of two best friends – a frog and a toad – have a sweetness that translates well for this musical production. The lyrics are easy to understand, the plot is easy to follow, the messages are easy to grasp. Basically, A Year With Frog and Toad puts the easy-reader format of the books on stage, making this a good show for kids of almost any age. 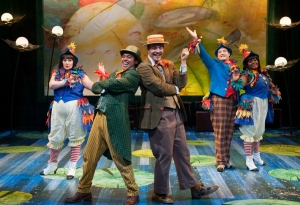 Imagination Stage, known for its top-notch, professional children’s theater productions, creates a set and costumes that are eye-catching without being over the top. The actors playing Frog and Toad sport muted green and brown suits and top hats (no oversized eyes or webbed feet here), while the other animals are a little more pronounced with clownish brights for the birds and a green umbrella acting as a turtle’s shell. The set doesn’t change a whole lot throughout, with painted-on water and lily pads covering the floor and 20-plus shiny frog statues framing the front of the stage.

As in Lobel’s books, short scenes each tell their own story. But the quick acts do have a few storylines running through them that keep them connected enough to create a cohesive plot. A Year With Frog and Toad covers one year, natch, going from season to season. Material is pulled from more than one Frog and Toad book, so some readers’ favorite tales are likely to be included such as “Spring,” “Alone,” and “The Swim,” while other favorites didn’t make the cut, such as “The Lost Button.”

The snail, who has been asked to deliver a letter from frog to toad, drew the loudest laughs for his slow pace. (Frog should use email or FedEx next time.) Snail pops up between several scenes, making a little progress around the aisles of the theater, to the delight of the audience, and eventually reaches Toad’s house at the show’s end. 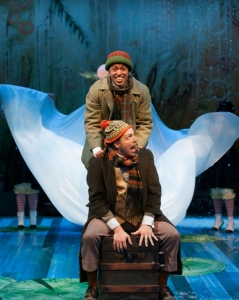 There are spoken lines but for the most part, the dialogue is sung. Some tap-style moves are included in the choreographed numbers. Special effects include a realistic snowfall. At the only scary point in the show, a simulated thunderstorm rattled many little kids in the audience. The scene has Frog recounting a ghost story in which he is young and gets lost, and it is partly told with shadow puppets. It was the only part of the show – which Imagination Stage recommends for ages 4 and older, and which I agree with – that might frighten kids. While my six-year-old didn’t seem phased, the scene could be looked at as an important moment for a child to get through. The show is, after all, about being there for your friends and getting through all that life throws at you. Sometimes, that’s a big batch of cookies, but other times it’s a frightening storm.

Imagination Stage is running A Year With Frog and Toad during the holiday season. The story covers a full year but does finish off with a Christmas vignette before returning to the opening scene of the show to bring it full circle.

A Year with Frog and Toad (about 75 minutes with one intermission) is playing through January 10, 2016. Tickets start at $10 and can be purchased online.