This was my family’s second visit in the past month to the Air and Space Museum Steven F. Udvar-Hazy Center. The usually bright and towering museum was transformed into something spooky and creepy. After we passed security, we braced ourselves to enter Air and Scare.

For the past seven years, the Udvar-Hazy Center has been sparking the interest of children at this annual event. Combining fun with education, kids get to partake in over thirty activities including indoor trick-or-treating, creepy crafts, spooky science experiments and more.

After your bags are checked, pick up a copy of the map containing all the Air and Scare festivities. If your child forgets his/her treat pail, have no fear. Free treat bags courtesy of the Smithsonian are available on arrival. Remember, costumes are encouraged and not just for kids. Several parents and all the staff and volunteers participated in the fun. One of the coolest was a museum staff member who donned the solar system on her head.

Activities Around the Museum 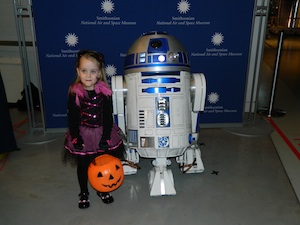 Perhaps the best part of all was that all the activities were free. All Air and Scare events took place on the lower level of the museum. We headed straight for the spook-tivity stations and our first stop was Mars Art. Corresponding with an exhibit on Area 51, the sign asked “if you went to Mars, what would you see?” Crayons and black paper were presented for children to draw their answer. Opposite the art tables was face painting. I cringed at the long line, but because there were several artists, the line was no more than a ten minute wait. It helped that a roving magician made the time pass. Face painting was mostly a choice of Halloween stuff, but you could also pick a flower or airplane. We passed on the ghost windsocks because of the long line and the fact that it took awhile to make something that I could do at home.

There were a handful of trick-or-treat stations which disappointed some of the crowd. This mom was happy to not experience my child’s sugar overload. The stations had candy on the table or had volunteers distributing M and M’s and the perfect choice, Milky Way. The Whole Foods sponsored treat station had the longest line and not because of organic lollipops. Everyone wanted a glimpse of the skeleton pirate who looked like he came out of Pirates of the Caribbean. Not so obvious were volunteers who had Smithsonian bags on a chair and were standing on the sidelines. My husband kept saying candy, but what they had wasn’t candy — it was cooler. They had glow-in-the-dark skeletons and bugs.

My husband and I really enjoyed the Discovery Stations, which are geared toward school age children. We got to touch a meteorite, learn about weight in space using rats and try on space gloves and boots. Not for the faint of heart, but kind of comical was the station stressing the importance of wearing a spacesuit. When the volunteer lifted the mask, it revealed a skeleton.

Tweens and teens can learn how to pack a parachute, try their hand at a flight simulator or get a Halloween themed temporary tattoo. There were several simulators in the airplane hangar along with simulator rides which had extremely long lines. There was a guy dressed as a human parachute which was pretty funny. He’s a lecturer, skydiver and modern day dare devil. A nearby booth titled “Three Ways to Fly” illustrated birds, bats and bugs in flight. Other booths included a display from the Maryland Robotics Center and collectible figures from The Outer Limits. Visit Fairfax, the Friends of Frying Pan Park and the Fairfax County Park Authority were also on hand.

Moving on to the space area, you could hear giggles from children watching the Beale Street Puppets performance of Out Of Orbit. Behind that was a a hands-on play area demonstrating static electricity using a balloon, ball, and wands. I was fascinated by the Dark Skies exhibit which had a demonstration on light pollution. A simple box with a small opening showed how the sky looks at night. The purpose of the exhibit is to save money, save energy and to connect with the cosmos.

Who is the Event For? 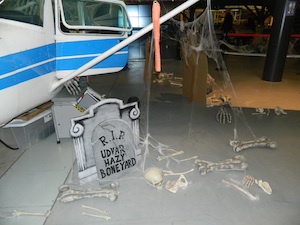 Air and Scare is not too scary and is great for baby Yoda to Queen Amidala. Yes, Star Wars played a big theme in the event. There were long lines for photo opportunities for Star Wars characters which caused families to skip in front of others. It was unclear which line was for which character. It would have been nice if they roped off the area to make the lines more organized and manageable. We waited twenty painful minutes to meet R2D2, but when he whistled, it made my daughter smile. You can also get a picture with NASA astronauts or a storm trooper. If your kid can’t handle waiting, here’s a trick. Nearby in a non-crowded area, you can easily meet Hans Solo, Darth Vader, Chewbacca, Darth Maul and storm troopers. A lone storm trooper was also seen near the museum entrance.

For those with children under age 7, the Tot Zone located near the IMAX theatre is a place where parents can relax while little ones play. The brightly colored room offered dress up costumes, face painting, ride on NASA spacecraft inflatables and a cute, spider craft. Just outside the Claude Moore Education Center where the Tot Zone was held, story time was going on throughout the day. A photo op with Ernie is available at the info desk near the entrance to the museum.

We concluded our three hour visit with a visit to the IMAX theatre. Three showings of Looney Tunes cartoons required free tickets which can be had outside the theatre. They had a grim reaper silhouette on the wall which was a nice touch. For thirty minutes, we got to unwind and laugh to Halloween cartoons and a space cartoon starring Bugs Bunny. If you’re willing to drop some dough, the gift shop has a fantastic selection of air and space gear including the astronaut freeze-dried ice-cream. Two artists were selling and signing books outside the gift shop.

Air and Scare is traditionally held the Saturday before Halloween. I was concerned that my four year old wouldn’t be interested, but she loved exploring the spooky side of air and space.