Everything about Akeelah and the Bee, now showing at Arena Stage, is inspiring: the story, Akeelah herself, and the young actress who plays her (she’s onstage nearly the entire length of the play). With its themes of courage, community, and inclusiveness, the production makes for a great holiday theater outing for the family. 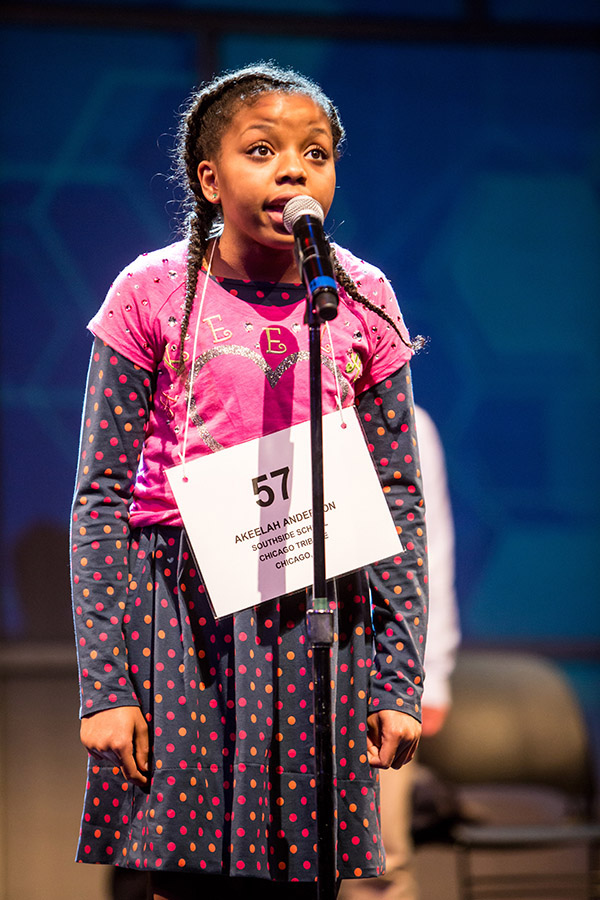 Based on the 2006 film starring Angela Bassett and Laurence Fishburn, the play is about an 11-year-old spelling prodigy who lives in Chicago’s violence-prone South Side. Akeelah’s father has recently been killed, her hard-working mom is having a hard time holding it together, her unemployed older brother hangs out with the neighborhood thug, and Akeelah herself gets teased at school for being a brainiac.

Despite everything, she has a supportive best friend, a school principal who believes in her, and a neighborhood that looks out for her. When she wins the school spelling bee, her principal introduces her to Dr. Joshua Larabee, a former National Spelling Bee contestant also from the South Side who can mentor her to be a champion.

They don’t hit it off. Akeelah finds him stuffy; Dr. Larabee thinks she’s rude, lacking in technique, and arrogant about her own way of learning words. But a close call at the district spelling bee makes Akeelah realize that she does need Dr. Larabee to train for the state spelling bee.

Her mother forbids her from the extra spelling tutoring at the expense of her other grades – which are low because she’s bored in class. Akeelah goes behind her mother’s back to meet with Dr. Larabee. He teaches her the roots of words and that “big words are just little words strung together.” Maybe most importantly, he also teaches her how to let herself be a winner, to not be afraid to be the best. “You don’t get to bully yourself in my presence,” he tells her. “No self-sabotage.”

She grows in confidence – and friends. She gets invited to join a spelling bee club at an affluent, mostly white private school. Her main competition there is a boy named Dylan Chiu, who unfortunately is that stereotypical Asian boy with the strict, success-driven parent.

Will Akeelah best Dylan to make it all the way to the national spelling bee finals in Washington, D.C.? Will her mother come around to her bee aspirations? Why did Dr. Larabee call her Denise once by accident? What secret is he hiding? And what will her friends back in the neighborhood think of her new fame and accomplishment?

I don’t want to give away the ending, except to say that it’s a testament to the story’s generous heart.

Who knew spelling bees could be as nail-bitingly exciting as a Superbowl game or a Wimbledon final? Your kid will also get a kick, as my nine-year-old did, out of references to right-now memes – like when characters grooved to “Watch Me (Whip/Nae-Nae)” or when one character dissed another with “Bye Felicia.”

I’d recommend this for elementary school-aged kids and older. It’ll warm your heart, make you laugh, and even teach you how to spell “xanthosis.”