After our summer vacation in Alaska, our girls, eight and 12, were eager to attend the grand opening celebration on Labor Day weekend of the National Zoological Park’s American Trail: Treasures of American Wildlife. They hoped to see some of the animals and birds they had seen on their cruise, but without the aid of binoculars. 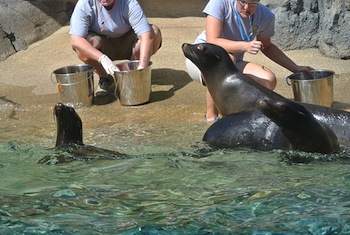 The area formerly known as Beaver Valley was just renovated at a cost of $42 million. The original plan was to fix the seal and sea lions enclosures but as is often the case the project increased to encompass the entire valley.

You can access the American Trail via Amazonia, the bears, by stairs from the Great Apes, or by the Elephant Outpost. We chose the Elephant Outpost, since I prefer to work my way downhill. As you walk by a waterfall, you can view a part of the new elephant trail. It was fun to see elephants walking by as we made our descent down the valley.

Our first stop was the North American otter habitat. The lively brother otters delighted us with their acrobatics and swimming style. You could view them in the water, at eye level, and from above (by walking the path behind the main one), as well as by seeing them in their lit up den.

If you follow the path behind the otters and beavers, you will find a cage with ravens. The American beavers were an enormous hit with our family. First, we saw them carrying branches downstream into their lodge. Later, at the Keeper Talk, we saw Willow and Buzz being fed vegetables by hand. It was adorable. The third beaver is their sibling Chipper. Mallards and a pair of mergansers share the beaver habitat.

The zoo’s Mexican wolves have been replaced by two American gray wolves. Crystal is white not gray; Coby is gray. The wolves were my younger daughter’s favorite animal of the day. For shorter people and kids, the wolves are only easily visible from the side (short axis), not the front (long axis).

Next, we saw the American bald eagle Tioga. A volunteer showed my daughters a bald eagle skull and explained that although they look large the eagle only weighs seven pounds.

For lunch, the girls split a $13 lobster roll at the new restaurant and my husband got a $9 salad cone. Although somewhat pricey, the food was tasty. The zoo has recently switched to Sodexo for its food service. The company is committed to local, seasonal, sustainable, and nutritious ingredients.

My younger daughter especially loved the small Tide Pool splash park with low fountains near the restaurant. It was naturalistically decorated with embedded sea stars and barnacles – perfect for cooling off on a humid day. 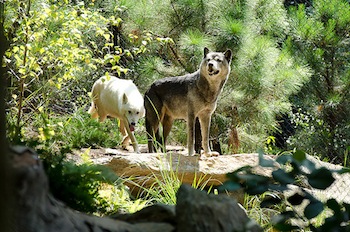 Both the California sea lion and gray seal pools have new wave machines and improved filtration systems. The California sea lion habitat has been completely revamped with a different orientation and good split level viewing. Two brown pelicans, Wendy and Tinkerbell, reside there too. There is now an underwater viewing cave with a long, stone bench. My husband and I relaxed on a bench and bobbed up every time that we heard all the kids (not just ours) shriek that a sea lion was swimming by. The sea lion show shown twice daily with stadium seating was a highlight of the day. Summer did back flips, somersaults, a headstand and a porpoise swim for the delighted viewers. Baby Sophie occasionally came over to join in the fun. Callie and Sidney, the other sea lions, did not participate in the show. My older daughter and I agreed that our favorite part of the day was the sea lion show. A close second was the beaver feeding.

The keeper said that the Gray Seal talk would start just a few minutes after the sea lion show but we had to wait a full 20 minutes. While not quite as charismatic or as flexible as the sea lions, Selkie, the 39 year-old gray seal (geriatric for a seal) blew bubbles, barked, and turned around. She will be joined by 3 more gray seals (including two of her adult daughters) this October. Two harbor seals will live with the gray seals and will be on view in November.

Our experience was greatly enhanced by the number of volunteers who wandered around answering questions. They carried beaver and otter pelts and skulls, a beaver tail, and two wooden flippers that showed the size difference been male and female sea lions.

The signage was excellent. There was general information in the middle and on the right of the sign information: What are their habitats? How big are they? What do they eat?

Vendors sell stuffed animals near the tidal pool and the entrance to the sea lion viewing cave. Towels are sold for $9 next to the tidal pool. Face painting is also available $9 to $15 depending on the style.

We had a wonderful afternoon at the National Zoo. Touring the Elephant Outpost and the American Trail together took around 3 hours. My major criticism is the restrooms are a hike away. My husband questioned the use of old-fashioned wire fence barriers at most of the exhibits. He also did not like the poles in front of the seals and sea lions with the metal tops. These poles created obstructed views of the sea lion show. In addition, these tops would be scalding on a truly hot summer day. Do not seat your toddler or infant on them. The American Trail is definitely more picturesque and attractively landscaped than its predecessor Beaver Valley but is filled with the same crowd-pleasing sea lions and otters.