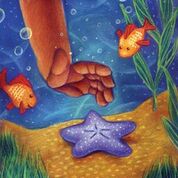 Aquarium at Imagination Stage
Aquarium tells the story of Jack and Calypso and their life on a deserted island. But this is no ordinary island. Instead of sitting on the beach all day, Jack and Calypso live in a world where fish soar through the air, lemons light up the sky, and sheep go parading by.

As luck would have it, children are not expected to simply sit by and watch. Jack and Calypso invite all visitors to their island (children and adults) to help them with all kinds of tasks from helping to plant a garden to making waves in the ocean. Along the way, magic happens, from an umbrella that makes its own rain to a spinning wheel that turns the theatre into a magical night with a sky filled with stars.

Throughout the show, children are invited to interact with the actors, often by being invited onto the stage. The show is filled with jokes designed just for the toddler set and lots of physical comedy that even the babies in the audience seemed to enjoy. The show opened with Jack trying to catch an imaginary and very active fly which had my son laughing out loud from the moment the show began.

Aquarium is a great opportunity to introduce even very young children to live theatre.

All Early Childhood shows at Imagination Stage, including Aquarium, are designed to be interactive so that even wiggly toddlers like my son normally have no problems getting through the show.