There’s not a lot of things that I can take all three of my kids (7, 4, and 1) – that we will all genuinely like on our own terms, but Aquarium was one of them. Now showing at Imagination Stage as part of their early-childhood play series, Aquarium is advertised as best for ages 1 to 5 but my oldest enjoyed it a lot and didn’t feel like it was a “baby show.” As a big theater geek, I appreciated its poetic language and its magical theatrical images. 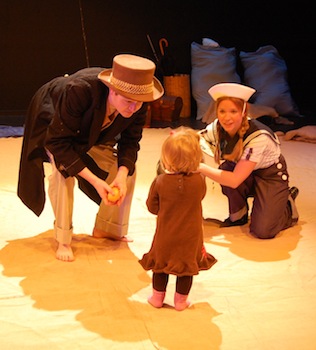 When the audience enters the theater, they’re encouraged to sit in a circle around a burlap-covered stage, kids on the floor or on a parent’s lap and other adults on wooden benches behind them. All sightlines are good in this production so it doesn’t matter where you sit. The play starts with top-hat-wearing Jack welcoming the audience to his island where he’s been living alone, except for a pet mouse. This is also his opportunity to lay out the ground rules of the production in a casual way: stay in your seats until there’s an opportunity for interaction, not everyone will get to play with all the toys, if your kid gets the wiggles you can take them out of the theater and come back later.

Jack then calls on a volunteer from the audience to be his assistant and he renames her Calypso. She is actually part of the production, which older kids such as my seven-year-old will figure out pretty quickly.

Then the audience starts to get involved with the play: an adult volunteer gets called to the stage and becomes the gardener who helps hand out “seaweed” (actually green gloves on a stick), which later transforms into daisies. Every kid gets a lemon, which they then get to bring onto the stage to help make a sun. Later, pillows become fish and blue cloth morphs into the sea.

There are a lot of cool interactive things like this, where little kids get to take part in surprising stagecraft, and I don’t want to give everything away, but I’ll just say that they get a chance to be in a sheep parade, rake a patch of grass, and create the sound of rain.

Soothing music helps calm things down for quieter parts of the play. The actors seem easygoing too: When a little girl rushed up to Jack early on in the show, he invited her to sit next to him, which she did for a bit, before her mother came up and took her back to her seat.

The storyline too has that meandering playful trajectory that little kids have when they’re spinning a tale: they’re going to the aquarium but on the way there they meet a gardener and a shepherd, then it starts to rain and they catch some fish, then they do some yoga – It all adds up to a great first theater experience and, at about 40 minutes, Aquarium is just the right length for short attention spans. Every time I see one of Imagination Stage’s early-childhood plays, I’m reminded how lucky we are to live in the D.C. area, which offers some of the best – if not the best – children’s theater in the country. 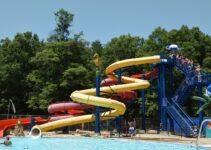