When is the last time you were at an event where AC/DC songs merged seamlessly with games of freeze dance?  Or where Dads with a Jack and Coke were comfortably sitting at a craft station making bead bracelets?   If you haven’t been to a Baby Loves Disco event, the answer is probably never. 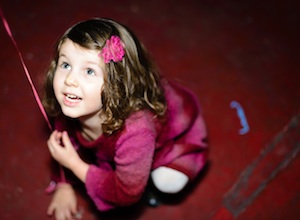 Hosted by a local Mom, Baby Loves Disco is a great answer to what to do with your child when you’re getting a little tired of singing the same songs week in and week out at your toddler’s music class.  Housed in a real nightclub during daytime hours, Baby Loves Disco strives to create an event that is as fun for parents as it is for tots and they have found the magic recipe.  A DJ plays songs familiar to adults while kids are invited to take over the dance floor to boogie down.  The DJ plays games like Simon Says and Freeze dance sporadically to help keep kids engaged.  On our recent visit, there was a mix of parents taking to the dance floor with their kids and parents hanging out on the sidelines while their kids danced chatting with friends and enjoying a cocktail from the bar.

And there’s more than just dancing!  There are also several craft stations available for kids who need a break from the dance floor.  Although the crafts vary, we’ve left with bead bracelets, foam heart magnets, spin art, as well as balloons and temporary tattoos.   There are also kid and adult friendly snacks galore included with admission.  Pretzels, grapes, carrots, animal crackers, cheese and crackers, olives, and Honest juice pouches are scattered throughout the venue to keep tummies full.  At events hosted at the Rock n’ Roll Hotel, dancing and some snacks are downstairs while crafts and heavier snacks are available upstairs.  At other venues everything may be in the same room. 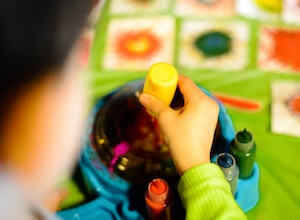 Baby Loves Disco is geared towards infants through seven year olds.  My three and six year olds both had a blast and we saw plenty of much younger and a handful of older children having a great time as well.  It is loud, dark, and has flashing lights, so if you think that may bother your child you should prepare him ahead of time.  The event lasts around 2.5 hours.  On our visits, the crowd started thinning in the last hour so if you want to avoid the crowd you can plan on arriving a little late.   The cost is $18 per person or $60 for admission for four.  Anyone who can walk needs a ticket.

Tickets can be purchased in advance online or with cash only at the door.  Coat and bag check is available for a nominal fee but most leave their coats on a chair in the venue.  Everything on-site is included with the price of admission, except alcohol.  Stroller parking is available outside.  The event organizers also set up a changing table for babies.

Upcoming events are as follows:

Have fun getting your disco on!