Grab the Prince or Princess in your life and head on over to the Workhouse Arts Center in Lorton, VA.  Mestey Films Production proudly presents a twist on Beauty and the Beast.  Once again, a dynamite cast and crew have come together to give their audience a show stopping performance! 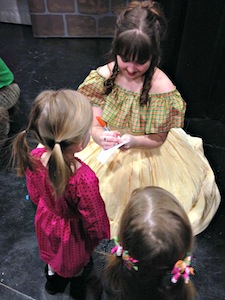 Set in a small theater with stadium seating, it’s a good idea to arrive early as seating is first come, first served.  After you settle in, the show will start promptly at 1pm, opening with a sweet talking cupcake played by the spirited Vianlix-Christine Schneider.  If you and your company have seen the Disney version of Beauty and the Beast, you will be able to make some connections while watching the play.  You will also be surprised by some of the twists and turns that the talented producer, Vianlix Mestey, incorporates into the storyline.

As the line of characters work on breaking the awful spell placed upon the Beast, the cast plays effortlessly off of one another.  A hopeless romantic, Chaleur (Andrew Cooke), tries hard to coach the Beast into more of a smooth talker so that he can share his love with Bell.  Meanwhile, the egotistical and believable Croissant (Ariel Gonzalez), can barely take his eyes off of himself as he sets out to rescue Bell in hopes of marrying her.

Will Bell fall in love with the Beasts inner beauty or be whisked away by the villain?  The Beast (Adam Puleo), is a gentle, curious character that wins the hearts of the audience.  No need to be alarmed at his gruffly voice as he does not come off as scary and does a magnificent job of playing his part.  Bell (Samantha Franklin), captivates the audience once again as she delights the hearts of all.

Approximately 30 minutes into the show, an intermission will allow you to stretch your legs, use the bathroom or 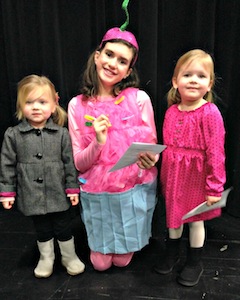 grab a snack from the mobile concession stand.  All snacks are sold at the foot of the stage for $1.  Snack choices include fruit snacks, bottled water, juice boxes and a variety of chips.

After the production, all audience members are invited to meet and greet the spectacular cast on stage.  For many children, this is an exciting invitation!  The charismatic cast members were delighted to interact with their starry-eyed audience members as they signed autographs and made small talk.  Photographs are encouraged during this part of the outing!

There are only four shows left so hurry and buy your tickets!  Shows are available on the following dates and times: