After attending a friend’s party at Build-a-Bear Workshop, my daughter was excited to host her own “bear party” to celebrate her 4th birthday. We had a fabulous experience and her party was one that we will not soon forget.

Booking your party is super easy. I booked our party online, paid the $75 deposit, and was emailed a receipt. Build-a-Bear has resources online for planning your party, including printable invitations, to make everything go as smoothly as possible. We also set a price limit for each child (though this can be changed on the day of the party) On the day of the party, all you have to do is show up and have fun – the Build-a-Bear staff takes care of the rest. 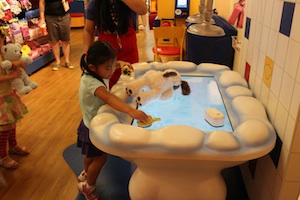 We were assigned an enthusiastic employee who was in charge of our party. After giving my daughter her special “It’s My Birthday!” nametag, she made name tags for all of our guests and helped keep them entertained while we waited for the rest of her friends to arrive. They were then taken over to the animals, shown which to choose from, and each was helped to select their new friend.

The group then went back to name their new animals. The staff did a great job helping each child pick out a name and kept track of everyone’s tags and names for later. Next came the most exciting part for the kids  – stuffing! The group played Simon Says as each child got a turn to stuff their animal. As a parent, my favorite part was next. Each child was given a small heart. They did an elaborate heart ceremony and made birthday wishes for my daughter before each putting them in her animal. They then did the ceremony a second time so each of their animals has a wish and heart as well.

After marching to another part of the store, staff members sewed up the animals, and then we brought our animals over to the bath area where each new friend was treated to a bath in the special interactive bathtub.  After the baths, our party coordinator helped the guests pick out bows or bow ties (or, in many cases, both) for their animals. You can also have your guests pick out outfits for their animals, though that’s recommended for older children. At the end of our party, the staff took a group picture with all of our guests and their new friends and led the group in singing “Happy Birthday.” Each child then took home their new friend is a special carrier complete with a birth certificate for their new friend and information about online fun and games.

The party truly couldn’t have been easier. Our coordinator was wonderful – she did a great job of keeping twelve 4-year olds entertained and engaged for the entire time. The best part is that the staff did everything – all we had to do was take pictures, socialize with the other parents, and enjoy watching our daughter have fun with her friends.

We would definitely recommend a party at Build-a-Bear, and are already hoping that our daughter picks a bear party again next year!