We arrived 30 minutes early to watch Blossom’s Rainbow at the Athenaeum in Old Town Alexandria.  With this being our second show with Arts on Horizon, we knew to arrive early!  The doors were not open until 10:05 so we waited with others outside.  Once inside, we gave our names to a friendly hostess from Arts on the Horizon, and were invited to play. 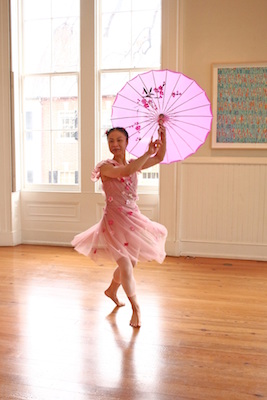 This theatre company is focused on keeping preschoolers happy.  Books were available on the floor for children to browse through and read while waiting.  All the books were chosen around the theme of the performance.  There were also Japanese flashcards and Japanese style dress up clothes for the children to try on.  Metal cookie tins were available and children were welcome to make noise.  The best part of all, were the fabric cherry blossoms that children were given to sprinkle around the large green blankets.

A few minutes before show time, most children were sitting with parents on the green blankets.  Soft Japanese drums (taiko) began to play and an animated drummer interacted with the children.  This taiko performer was excellent.  With 16 years of experience, he now performs at the National Cherry Blossom Festival, Japanese embassy, Kennedy Center and many other professional venues.  It was a beautiful part of the show.

The performance began with Blossom and a male dancer acting out various scenes with no voices – only drums.  The show was entirely performed with movements, sound effects and choreography.  It was a beautiful, exceptionally well done performance that kept all children and parents captivated but NOT overly stimulated.

The performers flowed through a story line that involved water, fish, music, a painting, clapping and soft drum music.  Scarves were waved in the air that eventually became a rainbow flag that Blossom waved.  A relaxed atmosphere allowed the performers to interact slightly with the audience, but nothing that would make a child uncomfortable.  Most children were between the ages of 2 to 5 but there were a few babies and older children as well. 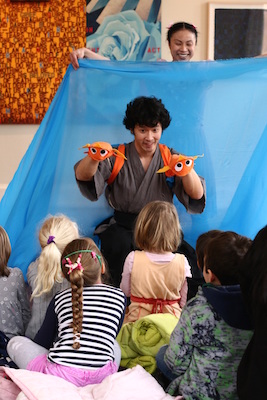 When the show finished, the performers stood by the door to greet children.  They were very engaging, took photos and spoke with all the children.  Blossom allowed my daughter to touch the flowers on her dress.

There is stroller parking.  Bring some cash because there is a basket of shaker eggs for purchase on the counter ($3/each).  Parking is very easy at the Athenaeum.  We found street parking very close and there are many restaurants on King Street within walking distance.

Blossom’s Rainbow will be at The Athenaeum in Alexandria, Virginia through March 29, 2015.  Tickets are just $8 for children and adults.  Children under 12 months are admitted free of charge.  We recommend you purchase your tickets in advance as they do sell out!  If the dates at The Athenaeum don’t work for you, Blossom’s Rainbow will also be at The Atlas Performing Arts Center April 3 to 11, 2015.  Purchase tickets online.