I realized recently that my younger son, who’s almost 4, had never been on a boat. So I was excited to take him and my older son (almost 8) on a pirate cruise leaving from Georgetown. The company, Boomerang Pirate Ship, started operating in June 2013, with several departure days and times. We booked a weekday afternoon cruise.

Planning the Visit to the Boomerang Pirate Ship 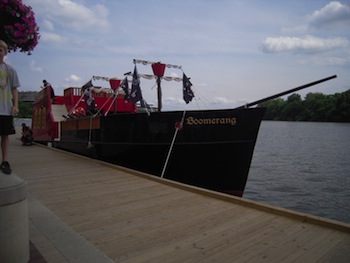 We arrived at the Washington Harbour dock about 30 minutes before our cruise time. There was no signage for Boomerang, and I assumed the ship was out on another cruise, so we killed time in a grassy area nearby. About 15 minutes before our departure time, we walked back over to the dock and spotted a woman in a can’t-miss pirate hat. She checked us in, and soon we saw the ship coming in to dock.

Once aboard, the kids stationed themselves at one of the dozen water cannons. They are only turned on by the crew, and sharing is a must so that everyone gets a shot. The 54-foot vessel felt spacious and safe. The railings on the side go as high as my four-year-old, and we were told there are lifejackets on board (I noticed compartments marked as containing lifejackets). Our cruise had 49 passengers and four crew members; full capacity is 90 guests and six crew members. There was an adequate amount of bench seating around the ship, including some under cover and some on the second level. We were fortunate that it was a cooler, cloudy day; hats and sunscreen would be essential on hot, sunny days.

As we pulled away from dock, one crew member set up the plot for us: His brother had stolen the key to the treasure chest we had on board and we would be searching for him in the Potomac waters. Another crew member taught us some pirate lingo by quizzing us and holding up a clipboard with the words on it, including shiver me timbers, ahoy, and sail ho.

Family Fun at the Cruise 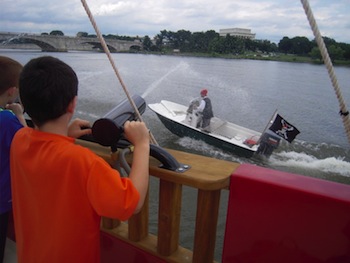 Next, some pirate music was piped in (it later turned to pop songs), and kids were invited to get temporary tattoos and face paint of a skull and crossbones and other pirate-y things applied to their arms. As we cruised, my son and others noticed the landmarks we were passing, including the Lincoln Memorial, but it was up to passengers to identify the sights.

Once the chest was opened, each child could pick two treasures (pencils, candy, fake coins, and the like). After a round of limbo and being taught a pirate dance (with moves such as “swab the deck”), we returned to dock. The cruise was about 50 minutes.

Where and How to Book

Other companies operate pirate cruises that leave from Alexandria, Annapolis, and Baltimore, but this roundtrip from Georgetown was the most convenient location for my family. We had been on one other pirate cruise five years ago in New Jersey, and the Boomerang cruise was very similar. We enjoyed this outing and would recommend it.

Cruises leave from the Washington Harbour in Georgetown at 31st Street and the river. All cruises last 45 minutes to one hour, with the exception of the 5:30PM cruise (it’s two hours due to docking restrictions at 6:30PM). Cruises are generally offered on the various schedule, and days/times vary so check the schedule online for the most current offerings. Advanced purchase is required.

What to Know before you go