The city of Boston is steeped in early American history.  To fully appreciate Boston, walk the Freedom Trail, a 2.5 mile hike. Along the way, you will see 16 historical landmarks, mostly related to the American Revolution.  The walk will also take you through a number of Boston’s neighborhoods from the Italian North End to Charlestown, Boston’s oldest neighborhood. We had walked the trail when our firstborn was three.  Thirteen years later, we have 16 and 12 year-old girls, who both love history.

Before embarking on the trail, we began our day at the Boston Public Garden, a beautifully landscaped park.  My cousin, who lives in Boston, had recommended the Swan Boats as the one “must see” attraction of Boston. The Swan Boats are immortalized in the picture book Make Way for Ducklings by Robert McCloskey.  The 10 to 15 minute boat ride was absolutely charming.  On the ride, we saw geese, swans, ducks, and turtles.  The ride cost $2.50 for kids (2-15) and $3.50 for 16 and older. The boats operate weather permitting in the summer, spring, and fall  from 10 a.m. to 5 p.m. A short walk away is a bronze statue in tribute to Robert McCloskey’s book with a mother mallard and her lively ducklings.  This statue provides the perfect photo opportunity, especially for toddlers. 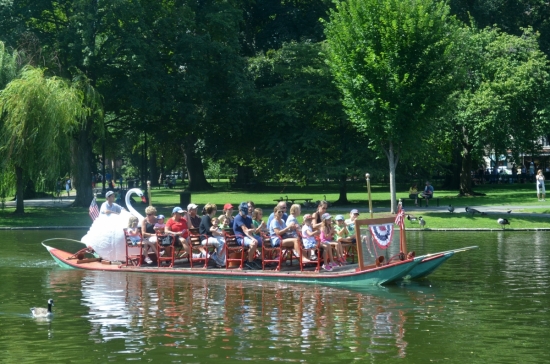 Walk across the street to Boston Commons, the oldest public park in the United States,. Youngsters will love the complex with a carousel ($2 a ride), Frog Pond (wading pool in summer/ice rink in winter), and Tadpole Playground.

The nearby Boston Common Visitor information Center, 139 Tremont Street, is the starting place for the Freedom Trail.  Here, you will find guidance on how  you can explore the trail.    We chose to purchase a $9 guide and tour on our own.  Younger kids can ask for a free Junior Ranger Guide.  A kids guide is available for $8 and a map for $3.  You can also pay for a tour with a costumed guide.  The most popular tour is Walk Into History.  The 90 minute tour covers 11 sites.  It takes place from 11 a.m. to 4 p.m. every hour on the hour; departing from the Boston Commons Visitor Center.  The same tour departs from the ArtsBoston Booth, Faneuil Hall,  May to November, Daily, 10:30 a.m. to 3:30 p.m. every hour on the ½ hour. The cost is $14 for adults, $12 for seniors/students, and $8 children. All the sites have good signage, so a map and/or guide are not strictly necessary but we appreciated the extra information.  You can also download an app on your phone.

The only sites that charge admission are the Old South Meeting House, Old State House and the Paul Revere House.  A combination ticket to all three sites is $16.50 adults, kids $2 and saves some money.  Tickets are available at the sites or the Visitor Information Center.

The trail is a thin line of red brick in the pavement and it would be almost impossible to get lost.  Wear comfortable walking shoes and bring a bottle of water. There are too many sites to describe in detail but I will  list a few notable ones. 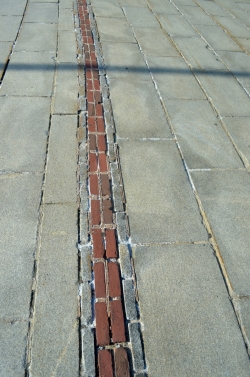 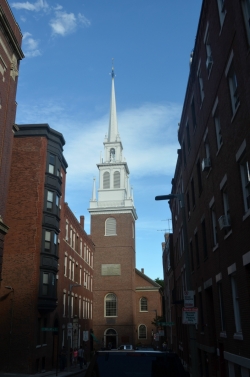 We skipped going into the Massachusetts State House, designed by Charles Bulfinch,  even though it was free, in the interest of time. It may have been a mistake since the interior looks amazing in pictures.  Across from the State House is one of my favorite sculptures – The Robert Gould Shaw and Massachusetts 54th Regiment Memorial by Augustus Saint Gaudens (not an official Freedom Trail site).  This relief sculpture honors the first African-American unit to fight in the Civil War.  The story of this unit is the basis of the movie Glory.

There are four cemeteries on the trail.  We found the Granary Burying Ground the most interesting.  John Hancock, Samuel Adams, Paul Revere, Mary Goose (who may have been Mother Goose), and the five victims of the Boston Massacre are all buried here.  Surprisingly, Benjamin Franklin’s parents have the central and largest monument.

Four houses of worship are included on the trail. Park Street Church was the site of many firsts.  The song “America” was sung publicly from its steps for the first time in 1831.  We paid admission to see the Old South Meeting House, the site of the baptisms of Benjamin Franklin and poet Phillis Wheatley.  Colonists planned the Boston Tea Party in this Quaker church.

A fun mosaic with the alphabet in front of the Old City Hall memorializes the first public school in America. Nearby, a brass donkey sculpture makes a perfect photo opportunity for young Democrats.  Young Republicans have to be satisfied with standing in brass footprints with the image of elephants.  A sign tells the story of how the donkey and elephant came to symbolize the two parties. 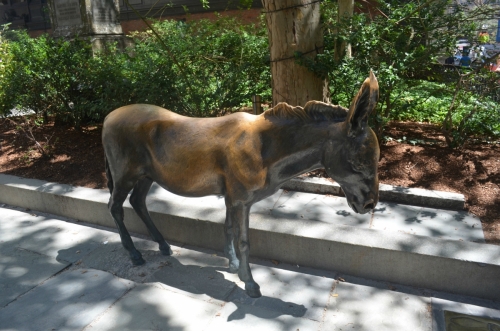 In front of the Old State House are circular stones that mark the site of the Boston Massacre on March 5, 1770.  This event increased the unrest between the Colonists and the British.  Faneuil Hall, America’s first public market, built in 1742 is the most popular site for giving up on the Freedom Trail in exhaustion or taking a break.  Faneuil Hall Marketplace greatly resembles Baltimore’s Harborplace.  Faneuil Hall Marketplace boasts 100 shops and 12 restaurants but most are chains you could find at home.  We found the Quincy Food Market crowded and unexciting.  However, the complex is great for people watching and street performers.  I got very distracted watching a group of urban dancers break dance and flip without any mats.

Another good place to take a break are the Greenway Fountains, another wading pool.  Next door is the year-old Boston Public Market.  This market is less entertaining than Faneuil Hall but has more gourmet choices.  We revitalized ourselves with $2 churros and a $5 chocolate drink at the Tazo stall.

The Paul Revere House, which the patriot and craftsman owned for 30 years, was well worth a visit.  We found it far more interesting than the Meeting House.  Revere had 16 children, eight with each of his two wives but only 5 to 9 of his children would have lived there at any one time.  The house contains some original furniture and a display case of Revere silver.

Two of the most kid-friendly attractions are in the Clough House between the Revere House and the Old North Church. Captain Jackson’s Historic Chocolate Shop features a free chocolate demonstration from bean to brew with a hot chocolate sample.  At the Printing Office of Edes and Gill, a costumed guide gave a great demonstration of printing and copper engraving.

The Old North Church is the oldest church remaining in Boston (admission by donation).  In April 18, 1775, Sexton Robert Newman hung two lanterns from the church to signal that the British were marching on Lexington and Concord “by sea.”  The Old North End neighborhood is famous for Italian restaurants but we did not partake.  Instead, we trudged on, tired but determined especially since we had quit at this point 13 years earlier.  From now on, all the stops on the trail are a hike away from each other.

Had I not spent so long watching the entertainment, we could have boarded the USS Constitution, known as “Old Ironsides.”  An adjacent and related museum has interactive exhibits on 200 years of maritime history (admission by donation).  The ship is closed on Mondays.  The final stop of the Freedom Trail is the Bunker Hill Monument located in the Charlestown neighborhood of Boston. This obelisk commemorates the site of  the first major battle of the Revolutionary War.

We took a cab back to the Boston Commons Park Garage.  Our cabdriver told us that most tourists only walk one way like us.  Our day took from 10:30 a.m. until 6 p.m. and we did not even enter every attraction.

I learned more about American history during the walk than I had in years of schooling.  It reinforced my daughters’ knowledge as well.   The Freedom Trail can be free or expensive depending on your choices.  You can explore any of the sites individually or take in all 16 sites in one day or over a group of days.  Of the three days we spent in the Boston area, our day on the Freedom Trail was the most enjoyable, informative, and we felt the most representative of the best that Boston has to offer.