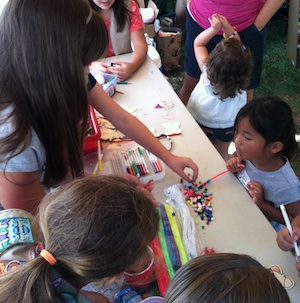 The Burke Centre Festival is held on the grounds of the Burke Centre Conservancy in Burke, VA. The grounds are large enough to host a good size festival but small enough to not be overwhelming to children. My daughter decided that she wanted to walk around and see what was there before settling on an activity to do. Many community groups had booths set up with children’s activities, and there were several carnival rides, pony rides, and bounce houses set up as well. These required tickets, and each cost $2-$3 per ride. My daughter really enjoyed the crafts that were offered by local Girl Scout troops (especially the kind Girl Scouts who helped her create her masterpiece!) and the animal show from Hidden Pond Nature Centre. The firetruck and police cars were also a big hit.

The festival has entertainment throughout the day on the main stage as well as several smaller stages and “roving entertainment.” My daughter has always enjoyed the puppet shows (which are packed with the preschool crowd!) and this year the entertainment on the main stage included family favorites Milkshake and Rocknoceros. On Saturday night from 5 to 10pm there is a wine garden for adults with a separate stage of entertainment as well. We didn’t check out the wine garden, but friends said that it was worth getting a babysitter for an inexpensive night out.

While our 4 year old critic was rocking out to Milkshake, I was able to look at some of the craft vendors and community booths. There was a nice variety of crafts for sale, including some items that I hadn’t seen before at area craft fairs. All of the local politicians were also represented, and many were actually at their booths greeting and talking to constituents.  A variety of food vendors were also at the festival, with both standard fair food and local favorites from area restaurants.

The best part of the Burke Centre Festival? It’s free. Even if you chose to go on a ride or two, it’s still a very inexpensive way to spend a few hours. We had a really good time walking around and taking in some of the concerts and activities. And it’s always nice when communities come together for such a family-friendly event. 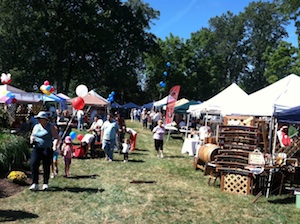 The Festival is located on the grounds of the Burke Centre Conservancy at 6060 Burke Centre Parkway. There is very limited street parking in the neighborhoods surrounding the festival. However, there is a shuttle bus that runs the length of Burke Centre Parkway. Terra Centre Elementary School is a short walk away, and both Fairview Elementary and Burke School are shuttle bus stops. We recommend parking at one of the elementary schools and either walking or taking advantage of the free shuttle.