Caps for Sale, The Musical! is an adaptation of the popular children’s book, Caps for Sale. The cap peddler wears a huge stack of caps, balanced carefully on top of his head. Brown caps, blue caps, gray caps, and red caps. When no one buys a cap, he takes a nap under a shady tree. But, when he wakes up, the caps are gone! Was it bears, pirates, one thousand thieves or a band of merry mischievous monkeys? (spoiler alert: your child WILL shout at some point “it’s the 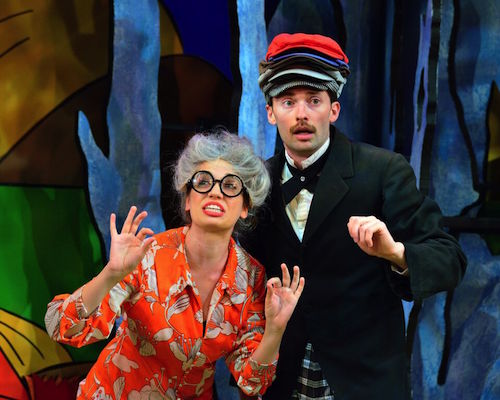 monkeys!!”, no matter how many times you explained before the show that it’s NOT ok to try to talk to the actors…)

Caps for Sale, The Musical! is children’s theater – it’s geared towards the youngest audience – but kids and adults of all ages will enjoy the show. The actors are really quite good, probably some of the best children’s theater we’ve seen. The story itself is engaging, and the catchy songs made the play even more enjoyable. The brightly colored set really captured my daughter’s attention before the show even started and the story was staged in a way that truly brought the story to life.

My daughter’s favorite part were the monkeys and I loved watching her howl with laughter every time they were on stage. Their monkey business delighted the entire audience. The theater was constantly full of laughter from children AND adults. She also loved getting to talk to the actors after the show and taking a picture with them. I really liked the age-appropriate introduction to live theater. There’s something so wonderful about seeing live theater, and it was great to be able to share that with my daughter.

Caps for Sale, The Musical! is an original production. It has a limited 3 week run at Adventure Theater-MTC before heading out on a National Tour and a run off-Broadway at The New Victory Theater from February 27 to March 6, 2016. I’m glad we were able to see it before it heads out on tour.

Adventure Theater-MTC is a small, intimate theater that’s perfect for children. Seating is first-come, first served, and there isn’t a bad seat in the theater. We also liked that it was not too loud, even during the musical numbers. The show runs approximately one hour with no intermission – the perfect length for children. And we especially appreciated the chance to meet the cast after the show (they’re not just great actors – they were awesome with their adoring pint-sized fans!).

Adventure Theater-MTC is located at Glen Echo Park. The theater is a bit of a walk from the parking lot, so leave yourself a little extra time to get there. We couldn’t pass up the chance to ride the carousel while we were there and spend a little time on the playground. You could definitely make a day out of seeing the play and enjoying the park.