Are you #teamcap or #teamironman?  A little over a year after Avengers: Age of Ultron opened in theaters, the Marvel Universe is out with another team-up film, this time centered around Captain America. And now, the superheroes are fighting each other. 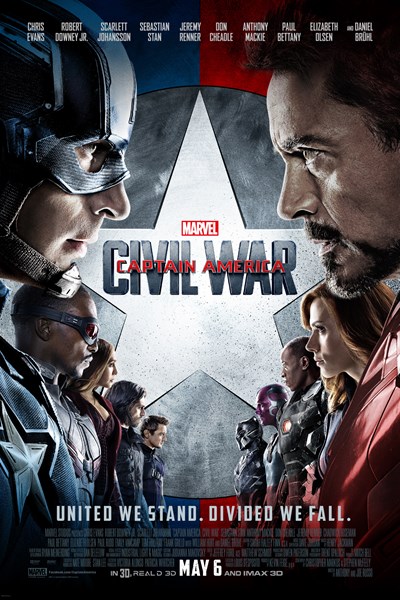 About a year after Ultron’s defeat, a mission for the Avengers goes awry, and this time the UN decides to step in by creating legislation that allows the UN to oversee and control the Avengers. If the Avengers don’t sign and agree with the Accords, the superheroes become criminals. After a disagreement about the law, lead by Captain America (anti-Accords) and Iron Man (pro-Accords), the team splits in half. But another explosion at the signing of the Accords has the world placing the blame on Bucky Barnes, the brainwashed assassin with a metal arm (and this writer’s fav character), from the previous Captain America movie. To Captain America’s disappointment, Bucky is captured by the US government and questioned by Helmut Zemo, the villain of the movie.

Cap and Falcon escape the facility with Bucky and discover that Zemo is hunting five other sleeper agents. But in escaping with Bucky, Cap has broken the new laws and the other Avengers come after him to try to contain him. Even after an extensive fight sequence, Cap and Bucky manage to make it to where the sleeper agents are hidden. Iron Man follows, and when Zemo reveals footage of brainwashed Bucky killing his parents, Cap, Iron Man and Bucky fight, leaving the ties between superheroes fully severed.

The movie is rated PG-13 for a reason.  Characters swear occasionally and there is a lot of violence, often in the form of explosions. While fleshing out Bucky Barnes’ back story, the audience is exposed to fairly tame torture scenes, and because the characters fight so much, there’s quite a bit of blood shown.

One of the best things about this movie was that it passed the Bechdel test – where two named, female characters talk onscreen about something other than a man – within the first ten minutes. Compared to other movies, female representation was a lot more prominent. Black Widow is one of the main characters, and the movie also puts a spotlight on Scarlet Witch and Agent 13. It’s ahead of other Marvel movies in that there are more minorities represented onscreen, including Falcon, War Machine and Black Panther. Black Panther’s character development was one of my favorite things to watch. This isn’t to say that Civil War is perfect and equal opportunity; there’s always room for improvement. Personally, I’d love to see Marvel include more minorities, specifically women and even LGBT+ characters. But Civil War is a step in the right direction.

This is a story rooted in emotion and relationships of the characters, and I enjoyed seeing these relationships develop. I loved seeing Cap and Bucky’s friendship evolve, watching the interactions between Vision and Scarlet Witch, and any of the fight scenes – superhero vs. superhero. A main fault in the movie was an ambiguous ending, though I can let that go because otherwise, it was a pretty solid film and changed the playing field for the future characters in the Marvel Universe.

I’ve seen the movie three times (so far) — twice in IMAX 3D and once in standard.  I recommend the 3D version this go around.  Captain America: Civil War is rated PG-13 for violence, action and the movie, I’d say is better suited for children at least ages 10 and up.