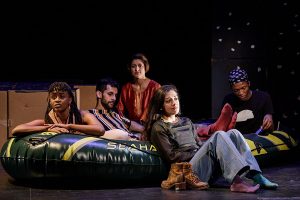 With recent headlines, many adults and children alike may wonder what the refugee crisis is really like. How can another child ends up having to leave home and spend days without where or how their next day will be like, or where?

Cartography seeks to explain what leads some people to leave their homes and seek a new refuge.  Told through the stories of five different refugees seeking asylum in the United States, Cartography explores the refugee experience through the eyes of families seeking to escape the effects of climate change, poverty, disease, and war. Children, women and men, seeking a different kind of life, come from all over the world. They lament leaving relatives, friends, entire lives. The only places they have known as home are left behind, as they travel to the United States seeking safety and security. 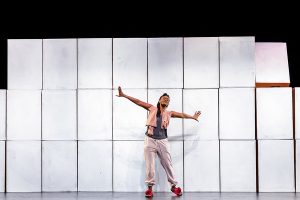 Cartography explores the uncertainly of nearly every aspect of the refugee experience. The play explores the mundane and the outright terrifying: From waiting, sometimes for months, at different boarder checkpoints; to suddenly risking all sorts of dangers and injuries, often life-threatening. The play also explores the acts of human kindness refugees find along the way and how they form new bonds, while keeping ties to their homelands. 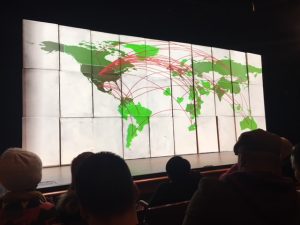 Towards the end, the actors tell their own families’ stories of arriving in the United Sates and then invite the audience to mark their family’s journey to the United States using a custom Cartography map.   The results are then projected on a large map projected on the stage and serves as a strong visual reminder that nearly everyone in the United States comes from a family who migrated here, even if it was several generations in the past.  This allows the audience to empathize more with the stories told as they imagine their ancestors’ journey and why they may have left their country of origin.

The scenery in Cartography is simple and effective, made nearly entirely of cardboard boxes that turn into things ranging from a starry night to a stark wall.

Cartography is a family performance.  However, younger children probably would not enjoy the play.  The Kennedy Center recommends Cartography for 9+ and we think that is a good guideline.  However, my eight-year-old daughter enjoyed the play and was able to follow along and there were children even younger in the performance we saw, although some content may have gone over their heads.  The play does touch on some weighty topics so it’s best to use your discretion in determining whether you believe your child can handle the subject matter.   The interactive portion at the end of the play in which the audience is asked to track how their family arrived in the United States can serve as a great jumping off point to discuss your family’s story with your child and the trials their ancestors may have faced.

Cartography is part of the Kennedy Center’s season–long exploration of The Human Journey, which seeks to promote deeper understanding of the migration of people and the resilience of humankind to overcome conflict, adversity, prejudice, and injustices.  If you are interested in learning more about these experiences or exposing your children to these issues in a gentle way, Cartography is a great way to do so.