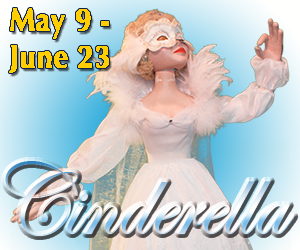 The Puppet Co. Theatre’s version of Cinderella has all of the classic elements of the beloved fairytale, but in typical Puppet Co. Theatre fashion there are several twists that make the story uniquely its own.

In the Puppet Co.’s version, Ella is a down-to-earth girl living in France’s countryside.  Although she has no mother and her father frequently travels, she happily spends her days with Prince Charming the cat.  All of that changes, when her father returns home from a trip with a new stepmother and two evil stepsisters.  The three new residents of her home expect Ella to wait on them hand and foot because the estate does not employ any servants.  They even change her name to Cinderella because of the dirty cinders she uses in the kitchen.  Cinderella does her best to please the new women in the house, but it is never enough.

One day a handsome man wanders into the house’s kitchen, which Cinderella is cleaning.  Although dressed like a beggar, the man is actually the Prince who got lost on a walk through the woods.  Not knowing his true identity, Cinderella is nevertheless kind to the man even though her stepsisters make fun of him because of his shabby clothes.  The Prince thinks Cinderella has discovered his true identity when he hears her calling Prince Charming, but quickly realizes to his delight that she is actually calling her cat and his secret is safe.  Smitten, the Prince makes Cinderella promise that she will attend the Royal Ball being held later that night.

Cinderella is able to find a gown to wear, but her stepmother destroys it.  As in the classic tale, a Fairy Godmother appears to give Cinderella not just a new gown, but also a carriage, a horse, and a horseman.  Still believing she is going to the ball to meet a man of modest means, Cinderella tells the King and Queen that she must decline their overtures that she marry the Prince because she is in love with another.  Cinderella easily spots the Prince at the ball because he is still dressed like a beggar, but the Prince does not recognize Cinderella because she is dressed like a Lady.

Nevertheless, the Prince falls in love with her all over again.  As in the original story, Cinderella flees the ball at midnight leaving her glass slipper behind.  Upon returning home, Cinderella gains the confidence she had been lacking. She finally stands up to her Stepmother and tells her that she wants to be called by her original name of Ella.  When the Prince inevitably arrives to see if the glass slipper fits Cinderella, we see the stepsisters’ comically large feet and sigh with relief when Ella and the Prince finally declare their love for one another.

The story is very sweet.  Backdrops for the show change seamlessly from the rolling hills of France, to the kitchen where Cinderella toils, to the Royal Palace.  The show injects some magic when, with a little bit of smoke, Cinderella is given a lovely new dress, a pumpkin is changed into a carriage, and Prince Charming the Cat is changed into a horseman.  My son was transfixed by these changes.  Throughout the show, children are shown that it is ugly to be mean, the importance of being kind to everyone, that you should not judge people based upon their appearance, and that it is alright to stand up to bullies.

At  the packed performance I attended with my son. The children in the audience were all completely absorbed by the puppets.  There was applause after each scene and laughter throughout the play.  If you go, you are sure to have a magical time!