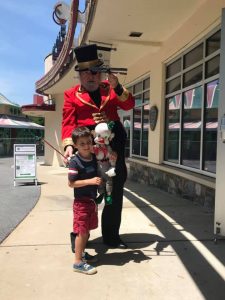 The Circus is in town — but this one stars puppets! Circus is the perfect showcase for master puppeteer Christopher Piper to display his considerable talent and creativity with an array of incredible feats of puppetry. Some of the puppets have really stood the test of time asthey were made by Piper’s father, Len Piper, well before the Puppet Co. was founded 35 years ago.

Circus opens with Piper taking the stage dressed in full Ringmaster attire accompanied by a lovely assistant. Just like in a real circus, all acts take place within the circus ring. The first act features a seal that Piper controls with such precision that the puppet really seems to come to life. My son was convinced that he was watching a live seal performing rather than a puppet. Another highlight of the show is a bear that performs a variety of tricks with a wand that he balances and throws in the air in ways few puppets can. My son’s favorite act was a wolf that Piper has to cajole into performing. Another crowd favorite was an unusual act involving Indiana Smith demonstrating feats of bravery with his ability to pop balloons with his whip and battle a lion. Of course, Circus also features clowns that clown around.

Circus is different than most Puppet. Co. Theater shows in that it does not follow a set story. Instead, patrons are treated to a non-stop variety of tricks that elicited more ohhs, ahhs, and wows than I have ever heard at a live performance accompanied by near non-stop clapping. After each act my son asked me if there would be another and was continually delighted with the entertainment on stage. When the show did come to an end he was visibly disappointed as were other children who didn’t want the Cricus to end.

Ladies, gentleman, and children of all ages will enjoy the show!

What You Should Know