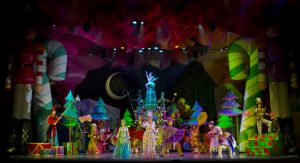 If you’re looking for an exhilarating and attention-grabbing performance for all ages, then Cirque Dreams Holidaze is the show to see! We attended their opening performance at The Theater at MGM National Harbor in late-December. The show is marketed as one for the whole family, so we tested this by bringing a group ranging in age from 3 to 74 years old. From the moment we sat down and the lights dimmed, my kids were drawn to the stage.

The show started with soulful, upbeat music and immediately had captivated with the insane balancing acts and talented contortionists. 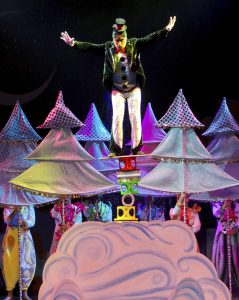 Even my often skeptical 6 year old was glued to the stage and even commented, “it can’t be over!” at intermission.

From the jump roping quintet who stole the show with their creative moves, to the hilarious mime that entertained the audience with some instrument fun, even to the extremely flexible contortionist that had the whole audience gasping – the show was a big hit!

The musical ensemble throughout the show had viewers, including my 74-year-old mother tapping her feet and singing with the chorus. 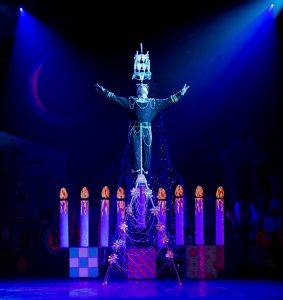 When the acrobats were not stunning the crowd with defying tricks that no one could ever imagine seeing (let alone doing), they were interacting with the crowd, sending the entire theater into laughter.

We’ve attended a fair share of holiday plays, but Cirque Dreams Holidaze was like no other holiday show we’ve seen.

If you have a chance to catch it in your area, I highly recommend getting tickets for your family, if not even grabbing a few extra to bring along a friend.

You will not be disappointed!