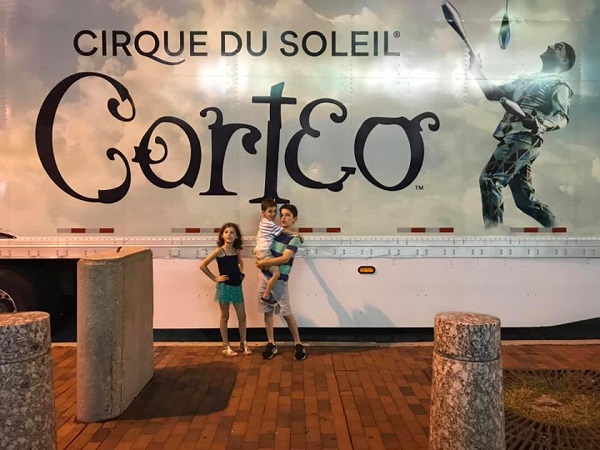 Cirque du Soleil – Corteo shows have a well-earned reputation for being spectacular, other-worldly, and magical.  The latest Cirque du Soleil to pass through our area, Corteo, creates a true world of fantasy while at its core delighting and entertaining as only a circus can. 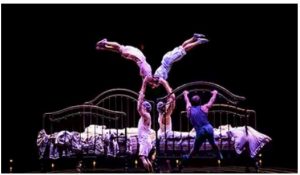 Corteo begins with the musings of a sad clown who has died.  But, rather than being morose, angels descend, the clown gets wings that fit just right, the life of the clown is celebrated and the good times are remembered.

Despite the show being premised on a death, it winds up being very funny while creating magic.  There is music created by whistling, flutes, and enormous glasses filled with water.  A clown walks upside-down from the ceiling, acrobats fly through the air in vintage-inspired costumes, and there are a couple of incredible acts with hula-hoops.

In my children’s favorite act a clown floats through the air suspended only by enormous balloons – and a lot of help from the audience who is encouraged to tap her feet to change her direction and keep her in flight.

The set of Corteo somehow manages to create an intimate experience, despite being in a large arena.  The audience is divided by sitting on both sides of the stage, making the arena seem cozy.  On either side of the stage, live musicians sit behind an ornate wrought-iron gate that lends the feel of an old European café.

There are even chandeliers hanging from the arena’s ceiling.  This makes it a good choice for children who may get overwhelmed by other types of large arena shows.

Corteo is a great choice for a family outing.  My children, ages 4, 8, and 11, all loved it.  The kids appreciated all of the impossible feats they saw, like climbing a ladder that went straight up in the air and a bed that is a giant trampoline that hurls anyone who jumps on it high into the air, while my husband and I appreciated some of the more sophisticated acts in the show.

All of my kids were entranced throughout the show and Corteo made for a great and memorable family outing.  With the long weekend ahead Corteo should be on your to-do list! 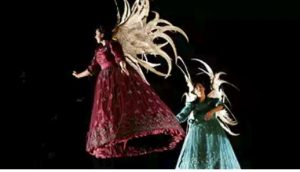