Dinosaur mania is sweeping DC this summer and you do not want to miss out!

After five long years, the dinosaurs have finally returned to the Smithsonian’s Museum of Natural History.  The new Fossil Hall is nothing like the dimly-lit exhibit of the past.   While the old Fossil Hall centered solely on dinosaurs, the new exhibit instead explores the concept of the dinosaurs as they existed in deep time and the role dinosaurs played in evolution as well as what they can teach us about modern-day animals.  The exhibit also explores the extinction of the dinosaurs and ties their demise into the climate change we are experiencing today and the threat of extinction faced by other animals.

Dinosaurs, of course, are the centerpiece of the large, brightly-lit Fossil Hall.  Enormous fossils are posed in action much as they probably existed when the roamed the earth.  The museum’s T. Rex is posed feasting upon a fallen Triceratops, with damage to the Triceratops’ skull evident.  Rather than looking at dinosaurs as curiosities from the past, visitors are given an in-depth look at how they lived — and died.  There are several dioramas throughout Fossil Hall as well as interactive exhibits, including one my son loved on how humans evolved from dinosaurs, an exhibit that allows visitors to electronically feed dinos, opportunities to touch casts of fossils, an exhibit centering on dating fossils, volunteer-run carts where kids can engage in activities like measuring and identifying fossils, and more.  There is also a large area where visitors can watch Smithsonian researchers in the process of working with real fossils, which was an endless source of fascination for my son.

The National Zoo did not want to be left out of dino mania!  This summer is Dino Summer at the National Zoo.  Throughout the zoo you will find animatronic dinos that look like real dinosaurs – including one that squirts water at unsuspecting visitors.  The zoo is always fun in the summer and this added attraction makes it even more fun.  Seeing the animatronic dinosaurs is free and there is a live, intactive show and photo opps available at an extra cost. 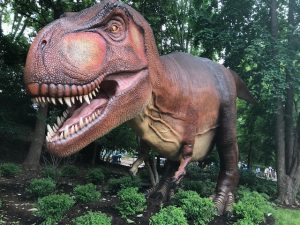