At Dinosaur Park in Laurel, Maryland, children can experience what it would be like to be a paleontologist and look for fossil fragments in the most important dinosaur collecting site east of the Mississippi.

It is home to a well preserved, rare deposit of approximately 115 million year old fossils.

Sound interesting? Here’s all the details.

Dinosaur Park is actually just a small 7-acre park in Laurel that is surrounded by a business park.

The site was an ironworks until the 1920s and then a brickyard until 2005. The park is good for all ages, from toddlers, who love to play in the dirt, to older children, who know more about dinosaurs.

What Fossils Have Been Found

Fossils were first found here in the 18th century. The bones that were originally found are from Astrodon johnstoni, Maryland’s State Dinosaur, which is the second dinosaur found in the United States.

Fossils that have been found at this site since this time include:

In fact, hundreds of fossils have been found here. These findings are now housed at the Smithsonian.

So what can the kids actually do? The interpretive garden is actually open to the public daily from dawn to dusk. It’s not overly exciting during this time and it’s really best to come when there is an open house. There is, however, a playground which kids can play at anyday.

The hands-on open houses, which takes place in a gated area, happens on the first and third Saturdays every month.

As you enter the garden, you’ll be asked to sign the guest book. About every 15-20 minutes, depending on the crowd, an interpreter will give a short talk about the history of the park, what you might find, and how to identify it.

During the talk, you can sit on large chunks of ironstone as samples of some of the finds are passed around.

Then, the gates are unlocked. You cannot enter the fossil area, until you have listened to the spiel. If you have to wait, read the four informative signs about Maryland’s dinosaurs and prehistoric plants and the history of the park.

These are all plants that would have grown during the Cretaceous Period.

During this period, Laurel, Maryland, apparently resembled a Louisiana swamp.

Once inside the gates, you’re free to surface collect on the hill of clay within the yellow taped in area. If you’re lucky, you may find:

Don’t expect to find anything big or showy. But still, this doesn’t take away from the fun of being able to search for these fossils where so many have been found.

While we were there, one person found a crocodile jaw and it was considered quite the find.

All finds have to remain within the park. If it’s especially noteworthy it will be sent to the Smithsonian. You, will, however, get credited with a label for a significant find.

After an hour of searching, all we found were a couple of pieces of ironstone that the interpreter said we could keep. Interpreters were very helpful and attentive.

The best time to go is on the first and third Saturdays of the month from 12pm to 4pm for October to May, and 10am to 2pm for June to September when they have digging the fossils activities for kids.

Admission to Dinosaur Park is free.

Dinosaur Park is located at 13100 Mid Atlantic Blvd, Laurel, MD 20708. There is plenty of parking available on site. 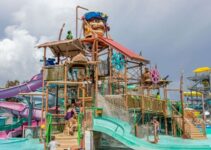