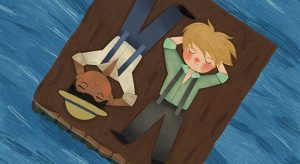 Huckleberry Finn is not an easy story to tell young children, but Adventure Theatre manages to do it well. It just goes to show that well crafted stories do not need to shy away from tough issues… in fact, they might be the best way to introduce these topics to our children!

Huckleberry Finn’s Big River is adapted from the Broadway show Big River.  Several adaptations have been created for young audiences, but Adventure Theatre’s version is a result of close collaboration with African American organizations in the area. This ensures a play that retains historical accuracy and is sensitive to issues regarding race.

In this version of Huckleberry Finn, Huck escapes from his foster family because he does not like going to school and being taught manners. Shortly after he escapes, he discovers that Jim, a friend and slave his own age, has escaped as well.  The two join forces in order make it to the free states, where Jim plans on working to save enough money to buy the freedom of his mother and sister. Along the way, they meet a couple of escaped felons. It then becomes up to Huck to foil their plans: to trick a wealthy orphan, Mary Jane, out of her inheritance and to sell her salve and best friend, Alice.

He might be a young Huck, but he’s old enough to understand the difficult issues faced by people around him, including his friends. Huck knows that he is doing the right thing by protecting Jim from capture and sale, but struggles with knowing that slaves were considered property and that helping them escape is a crime. Through the story of Mary Jane and Alice, the audience also sees that slaves can easily be freed. Many people at the time knew without any hesitation that granting slaves their freedom was the right thing to do. As you might expect, the play ends on a happy note when Jim learns he had been granted his freedom and makes his way north to live in the free states. Huck continues the life of freedom he wants by traveling on the Big River.

The actors in Huckleberry Finn are very talented. Many of the lead roles are played by local teens who rise to the challenge of portraying complex characters. The play strikes a good balance between energetic songs and dances with more serious, dramatic moments.

Very young children will definitely enjoy the singing and dancing in the show. My four-year-old remained enraptured by the play, even if he did not fully grasp the issues. My eight-year-old daughter had a better appreciation for the story. After the show, she reflected upon the deep friendship between Huck and Jim and how terrible it was that some people could own other people even though, as the play explains through song, they are really just the same despite having different colored eyes and skin.

Black History Month is a good time to reflect upon the racial history of our country. Huckleberry Finn’s Big River is a wonderful opportunity to talk about the topic of slavery and race relations to young children. At its heart, the play encourages children to accept everyone, regardless of what they may look like, and to stand up for doing what’s right even if it’s not the easy or popular thing to do.