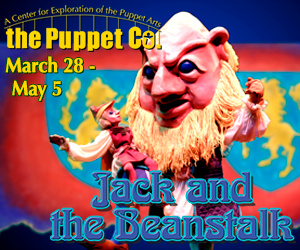 Whenever we are anywhere near Glen Echo Park my four year old son tells everyone around that we are near “where the puppets live.” He loves going to The Puppet Co. Theatre and gets so excited whenever I take him to a show. He is convinced that puppets live in one of the yurts in Glen Echo Park and come out to perform for him.

The story opens with Jack and his over-protective mother discovering that the cow they rely on for their livelihood, Penelope, has stopped producing milk. Jack tells his mother not to worry because one day he will be rich. His mother tells him that he needs to “get up and do something about his dreams.” Before Jack has time to jump into a get-rich quick scheme, Penelope the cow runs away when she finds out she is destined to become pot roast. Jack searches for Penelope and finds her in the house of a mysterious man who offers him a treasure in exchange for the cow. Jack turns down a love potion and invisibility cloak in favor of a bag with which the man seems reluctant to depart. The bag, of course, contains magical beans which overnight sprout a giant beanstalk leading to a castle in the sky. Children in the audience at the show I attended were mesmerized by the sight of the beanstalk growing on a screen onstage. When Jack’s mother finally allows him to climb the beanstalk, clouds created by puffs of smoke add to the illusion of Jack climbing ever-higher.

Once Jack reaches the top of the beanstalk he encounters a mute woman who is kind to him. The woman, however, is a slave to the Giant and her only happiness comes from playing a harp the Giant keeps locked away in his treasure chest most of the time. While Jack and the woman are communicating through gestures the Giant enters. As the only live performer in the show, and wearing a giant head, the Giant makes a big impression when he walks onstage and truly appears giant next to the puppets. Despite the Giant’s formidable Fee-Fi-Fo-Fums, Jack manages to escape with the Giant’s prized golden-egg laying hen.

Jack’s mother is thrilled with the hen and does not want Jack to face the Giant again, but Jack feels he must go back up the beanstalk to help the woman who was so kind to him. When the Giant discovers Jack, he sets a trap for him by tempting him with additional treasures. Jack, however, ignores the temptation of additional riches, and instead escapes with the kind mute woman. Home safely, Jack is still not content because the woman he rescued misses her harp. Jack braves the Giant a third time to get the harp back for his friend. This time, the Giant follows Jack down the beanstalk but his mother chops the beanstalk down before the Giant can harm anyone. The mother rejoices that the beanstalk will feed the family for a lifetime. Jack reflects upon his adventures and shares that he realized that it is not riches that makes him happy, but helping other people. And, rather than just dreaming about it, he shows us that he can put his dreams into action.

The unusual combination of on-stage projections, smoke, puppets, and a live actor make this production unlike any other you have seen. With wry humor, the Giant does assure the audience that he does not like “American food” but this may be lost on younger children.

In the performance we saw, the laughter started almost immediately when the first puppet appeared on stage and didn’t end for nearly the entire show.  My son hasn’t stopped saying “Fi-Fi-Fo-Fum!” since we saw the show. Let Jack show you what he’s made of!

Our Kids received complimentary tickets, but all views are unbiased and our own.