Marvel heroes and villains have landed at the Eagle Bank Arena in Fairfax for Marvel Universe Live: Age of Heroes. 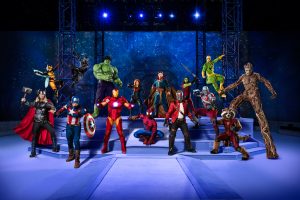 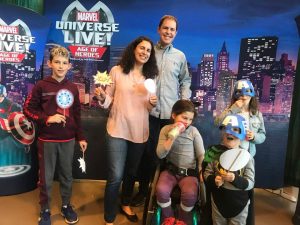 The show centers around legendary battle to defend the universe from evil! The Avengers, the Guardians of the Galaxy, and Spider-Man join forces with Doctor Strange, master of the mystic arts, in a race against time to recover the Wand of Watoomb before it falls into Loki’s hands. That said the storyline itself is really secondary to experiencing the immersive experience of being in Marvel Universe. The show has cutting-edge special effects, aerial maneuvers, pyrotechnics, martial arts, motorcycles stunts, and vast video projection that really does create an experience of making you feel as though you are a part of the action. At different points in the show the arena is filled with stars and the large video projections and other special effects are very effective at making you feel as though you are in the different environments the heroes travel to on their quest to save the universe from destruction. 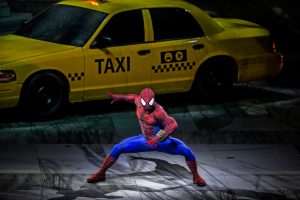 My four year old loved seeing Spider-Man swinging around the arena and catching bad guys with his web that seems to glow in the arena. He was also completely blown away by seeing the Hulk make an appearance towards the end of the show. My eleven year old, who has been reading Marvel comics and seeing Marvel movies for years, really enjoyed seeing this story played out live. My daughters loved all of the women characters incorporated into the show, but be aware that Captain Marvel does not make an appearance.

Marvel Universe Live is a fun time for the whole family!

For any parents with kids who have sensory issues, be aware that there are some flashing lights, loud sounds, and smoke.

There is plenty of free parking available at the Eagle Bank Arena.  There are two parking lots, one of which is across the street from the arena, so plan a little extra time to walk over if needed.