Don’t expect anyone to sing “When You Wish Upon a Star” at the Puppet Co.’s production of Pinocchio. This version isn’t a Disney retread. The Puppet Co. adapts the original Italian tale, by Carlo Collodi, of an animated marionette who just wants to be a real boy, into an adventure-filled 45-minute play geared to grades K to 6. Not as much the gullible innocent of the Disney version, this Pinocchio is a very recognizable little boy who wants to be good but more often than not makes wrong choices.

A quick rundown of the plot for anyone who needs a brushup: Carpenter Geppetto finds a talking block of wood and carves it into a puppet boy, whom he names Pinocchio. He dresses him in paper clothes and tells him he has to go to school. To pay for Pinocchio’s spelling book, poor Geppetto has to sell his cloth coat. While he is out, a talking cricket appears and tells Pinocchio to obey his parent or he’ll turn into a donkey.

Pinocchio sets off for school but never gets there. Instead he experiences a series of rollercoaster changes in fortune. He sells his spelling book to buy a ticket to a puppet show. He meets the hulking puppet master (whose appearance on stage provides one of the play’s mild scares), who at first threatens Pinocchio but ends up giving him five pieces of gold. He returns home to give the money to Geppetto but on the way he encounters a wily fox and a cat who end up robbing him. He lies to the Blue Fairy and his nose grows longer – to his dismay, but to the delight of everyone in the audience.

When he finally tells her the truth, his nose shrinks to its original size. He is persuaded to go to a carnivalesque land where every day is a holiday and everyone plays all the time. One day he wakes up and he is a donkey. He gets swallowed by a dogfish (not a whale, as in the Disney movie). Inside the dogfish, he is reunited with Geppetto. They escape from the dogfish and ultimately Pinocchio saves Geppetto from drowning, earning himself human status, transformed thanks to the Blue Fairy’s magic. Rollercoaster, right?

Some details may be different from the Disney film, but the morals remain the same: Respect your parents. Don’t lie. Hedonism can make a donkey out of you.

Both my eight-year-old and my 4.5-year-old enjoyed the play – though I’m pretty sure the latter didn’t get the entire plot. They both said their favorite part was when the dogfish swallowed Pinocchio. My 20-month-old had seen a play at the Puppet Co. before and enjoyed it, so I was surprised when she started crying as soon as we sat down on the theater floor, before the show had even started. It may be just a symptom of her separation anxiety phase.

Luckily there’s a live feed of the show broadcast on two TV monitors in the lobby. One of the TVs is across from a padded bench so we sat there and watched, while my older kids sat inside the theater in the front row. I noticed that a few other littler kids left the theater with their parents before the end of the show.

Seating is on the floor, first come, first served, with benches along the sides for adults with lap children. But sight lines in the theater are all good. 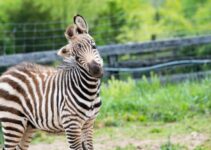