Queens of Egypt at National Geographic 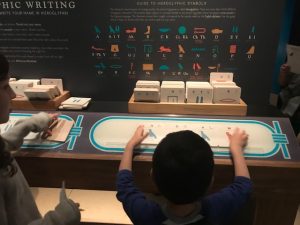 The National Geographic Museum frequently hosts kid-friendly exhibits and The Queens of Egypt is the most recent exhibit to be put on display that will appeal to DC area families. 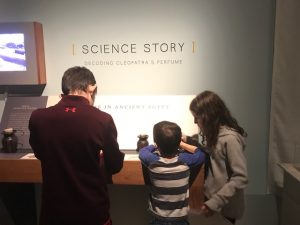 Many children are naturally drawn to learning about Egyptian mythology, mummies, and hieroglyphics.  The Queens of Egypt exhibit has everything kids love about the ancient kingdom but with a twist – instead of focusing on the male rulers of Egypt, the women rulers take center stage. 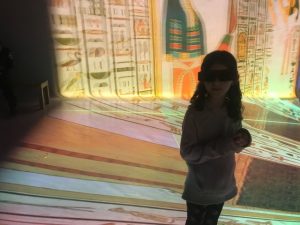 The exhibit includes a short film about the history of women rulers in Egypt, which included seven queens and more than 300 incredible artifacts, including monumental sculptures, sparkling jewelry, and impressive sarcophagi. There are also videos scattered throughout exploring both royal life and the roles of women in everyday life in Ancient Egypt.  The exhibit also includes several interactive exhibits including an ancient Egyptian game, a station where visitors can spell out their name in hieroglyphics, jars full of the smells of ancient Egypt, and others. The centerpiece of the exhibit is the 3-D virtual tour of one of the best preserved tombs in the Valley of the Queens. Visitors put on 3-D glasses and stand still in the center of a large room while the tour unfolds around you. It’s a really unique experience that completely immerses you in the huge, colorful tomb. Before entering, take the time to look at a model of the tomb. Because this is National Geographic, there are also many photos taken years ago showing the actual sites where many of the artifacts were originally found. 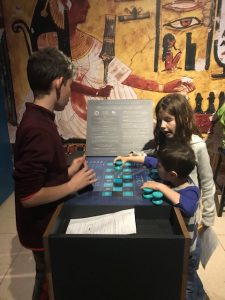 My kids, ages 11, 8, and 4, loved seeing the huge statues of Egyptian goddesses, watching an interactive video about all of the steps it took to make a mummy, playing an Egyptian game with sticks, and discovering their names in hieroglyphics. There is also a fun scavenger hunt for kids to do as they go through the exhibit. My kids loved looking for clues throughout the exhibit and were very proud of themselves when they found them. All together, we spent about two hours exploring the Queens of Egypt exhibit, but the amount of time it takes to go through the exhibit can vary greatly depending on your pace and how much time you spend at the interactive exhibits. 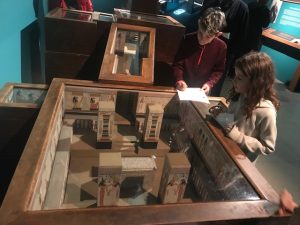 Getting there:  National Geographic is near the Dupont Circle station on the Red Line. There is also metered two-hour street parking and several garages nearby. 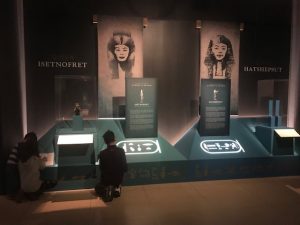