Rapunzel at The Puppet Co. Playhouse

Rapunzel is a fantastic one-woman show that puts a twist on the Disney version. As with most Puppet Co. Theatre shows, the story follows the original, classic fairytale.

This version of Rapunzel begins with a elderly man and his wife who have longed for children for years but assume that they will not have children. The man and his wife live next door to a lush garden filled with a species of radishes called Rapunzel, which incidentally is a real type of radish. The wife loves Rapunzel radishes and the husband sneaks into the garden to steal radishes for her. Eventually, the owner of the garden, who is a witch with magical powers, catches the man in the act. The witch makes a deal with the man that he can have as many radishes as he wants if he agrees to give her his first-born child. Assuming that since he and his wife are already old he will never have any children, he makes the deal and then forgets all about it.

Eventually, the couple does have a child, whom they name Rapunzel. As in the traditional version, the witch takes baby Rapunzel and locks her in a tower with no contact with the outside world until she is discovered by a prince. The prince, however, is discovered by the witch and blinded. Rapunzel is sent to a far off land where, coincidentally, she discovers the despondent prince. After restoring his sight the two live happily ever after. Throughout the show, there are jokes that cause the children to erupt with laughter. There are even opportunities for the kids to sing along with the characters. The show is masterfully done by a single puppeteer who masterfully portrays all of the characters. The 40 minute show is just right for younger audiences. After the show, be sure to stick around for a photo op with a puppet and the puppeteer.

My son’s only criticism of the show is that he wished it were longer.

Up next is Beauty and the Beast.

Tips for Your Visit 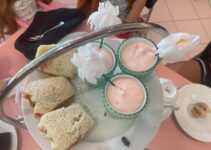