We came across the Roads and Rails Museum a bit by accident but are so glad we did.

My family hasn’t ventured to Frederick, Maryland, from our Montgomery County home very often, but on a recent Saturday we found ourselves amazingly unscheduled and decided to make a day-trip to the quaint town.

A quick check online pointed us to a train museum. I was skeptical since I’d never heard a peep about it, but we made it our first stop.

It turned out to be one of those discoveries that entertained us all and feels like a well-kept secret. One ginormous train setup and a room full of Lego displays made it well worth our 40-minute drive.

The Roads and Rails Museum is on one of the main streets in Frederick, and a small, free parking lot behind the building still had a few spaces when we arrived. We entered into the gift shop, which sells all types of trains and train-related goods.

It took two-and-a-half years to build the display, and additional tweaking since the museum opened in 2011.

I think it’s safe to say it’s one of the largest O-scale model railroad displays in the country. That’s right…we have a Frederick model train museum! The landscape includes a volcano, a cave mine, and lots of hills and mountains.

The main-room display stretches 127 x 22 feet. It’s all one big display set on a solid base a few feet high that’s topped with a few feet of glass. My four-year-old son was able to see most parts okay, but there are a few stools strewn about for littles (and many tots rode on parents’ shoulders).

My boys immediately noticed all the buttons you could press to activate parts of the display (the trains mostly zip around the tracks automatically).

Press one of the 30 buttons to get lumberjacks sawing logs, send a firefighter up a ladder, or turn on a drive-in movie.

It became apparent pretty quickly that we were going to want to do more than one lap around as there are countless things to discover.

We were so busy glimpsing all of the buildings, cars, carnival rides, police cars, zoo habitats, and gobs of other details that we almost forgot to notice the trains whizzing around the tracks, through tunnels, and over trestles.

There are a handful of trains always running, with a bunch more set on timers or making station stops, and a few that are motion activated when someone walks by.

Signs on the glass state, “Please do not touch the glass.” This is an understandable rule that we tried to follow but I also appreciated that it was not strictly enforced when kids pointed to something and inevitably touched the glass.

We could have easily looped around several more times, but we decided to peek into the other section of the museum.

What Else to See

We passed a small oval Thomas the Tank Engine setup and headed into the Lego room.

These displays (also behind glass) are set up a little lower than those in the main room so my 4-year-old could easily see them. Again the focus for us was more on discovering all the details than on trains (though there are Lego trains zooming around each setup).

There are certainly hundreds of mini-figures in the exhibits. My boys were extremely impressed.

If we hadn’t been hungry for lunch, we easily could have stayed much longer. But we left knowing that this is a place we’ll be back to visit again.

These setups weren’t huge and made me think our visit would be short-lived. But after paying our admission at the cash register and picking up one “Little Kid’s Scavenger Hunt” sheet and one “Scavenger Hunt/Expert Scavenger Hunt” sheet we passed through a door to an enormous, elaborate, detailed, discovery-filled, amazing — you get the idea — train display.

I’d recommend that if you’re going to fill out one of the scavenger hunts, you read through it before you even enter the main room.

I found some of the 16 questions on the little kids version to be a challenge, especially those that asked “how many” as in “how many police cars do you see?” and “how many Santa Clauses do you see?” You could circle around 20 times and still not know if you found them all.

I did like that the regular and expert scavenger hunts drew my attention to some things I wouldn’t have necessarily noticed, mainly pop culture and local references.

One building bears a Dunder Mifflin sign (from TV show The Office) and another is a replica of the 9:30 Club (the D.C. landmark nightclub). So while the kids enjoyed their scavenger hunts, they weren’t able to complete them.

The tickets to enter the Rails and Roads Museum are $10 for adults, $5 for children and kids under 3 are free. Tickets are online available on site and cannot be purchased online.

Once you see the amount of time, attention and detail that went into these displays, you’ll be happy to pay for it.

This model train museum in Frederick MD is located at 200 N East St., Frederick, MD 21701. There is free parking available on site.

Things to Do Nearby 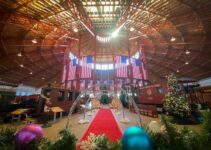