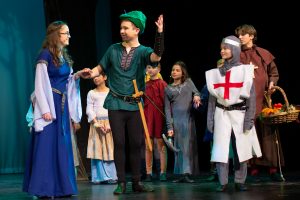 Director Susan A. Keady does not disappoint audiences with the imaginative sets and action-packed production filled with fighting scenes, humor and the actors weaving through the theatre aisles to expand the feel of intrigue right by your seat.

Encore Stage’s performance is based on the legendary heroic outlaw depicted in English folklore of the heroic Robin Hood stealing from the rich to feed the poor. This impressive interpretation of “Robin Hood” begins in Sherwood Forest where the valiant Robin Hood hides with his band of Merry Men to help the now starving villagers by robbing unsuspecting wealthy travelers passing through the woods.

The villagers have suffered under the rule of Prince John due to heavy taxes while their rightful leader, King Richard,  is away and fighting in the Crusades.

The story picks up when the Sheriff of Nottingham and the evil Lady Merle are robbed by Robin Hood and  are on a mission for revenge.

When the Sheriff and Lady Merle hatch a plan to trap him, Robin Hood must not only save himself, but his true love, Maid Marian from being married off to Prince John.  Can Robin Hood defeat Lady Merle’s sinister intentions and secure Nottingham for the true King’s return?

This play had all three of my kids at the edge of their seats. There were no dull moments and the rapid pace of action and humor kept all three entertained despite the various age difference.

There is something for everyone in this gifted performance.  “Robin Hood” is filled with exceptional scenery, fantastic acting especially from the believable villain, Lady Merle, and entertaining fighting scenes that though not scary, adds a flow of energy and intrigue. 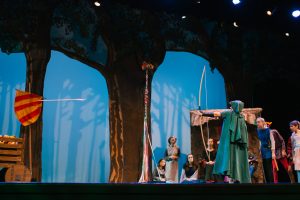 Children will walk away from this performance cheering for the good guys. The verdict from my seven year old son was “I liked the fighting scenes and the play was funny.” My nine year old loved the set and my 12 year old appreciated many of the comic relief moments performed by the ditzy Sheriff of Nottingham’s daughter, Anabel.  Two thumbs up for Encore Stage & Studio’s “Robin Hood”. 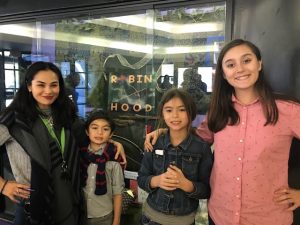 -Tickets are $15 Adults and $12 Children, Military and Seniors and can be purchased online www.encorestage.org or by calling the box office at 703-548-1154. I saw people buying tickets right before the play.

-Runs 90 minutes with a 15 minute intermission.

– Bring cash if you would like to purchase light snacks during intermission. 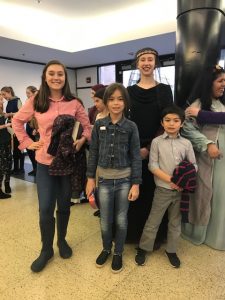