Who knew that rice had genes? How is it that a mosquito has 6 chromosomes? There are five million trillion trillion bacteria living on planet Earth. That’s a lot of bacteria! These and other bizarre facts are just a few things unveiled at the Science Museum of Virginia.

What’s special about the Science Museum of Virginia 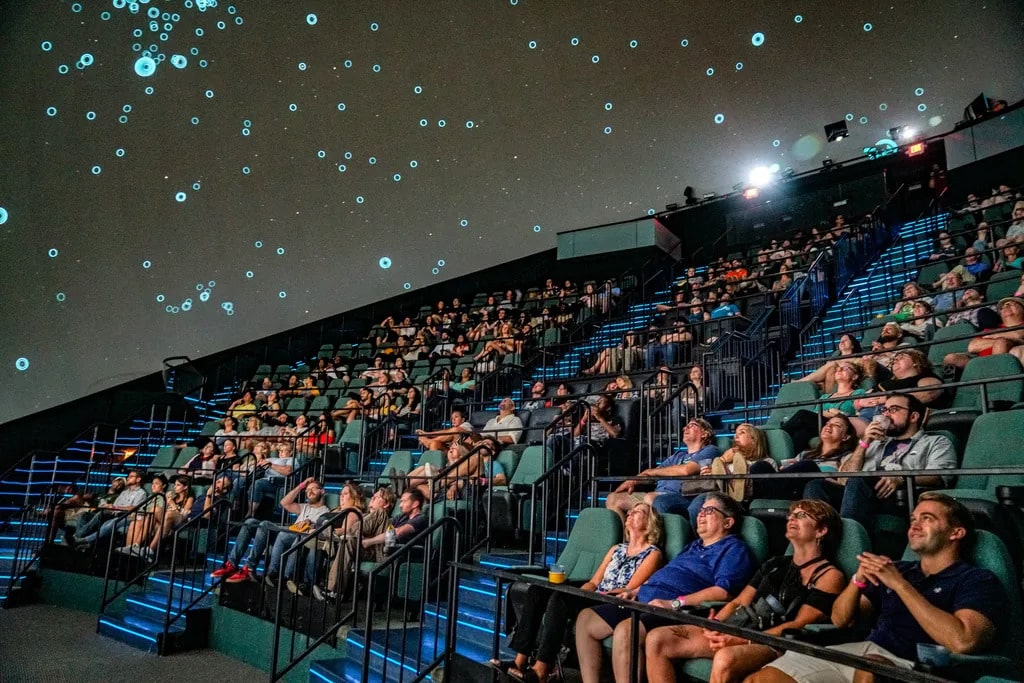 Pendulum. Located in the Rotunda, the pendulum illustrates the Earth’s rotation. Our visit began at the How People Make Things exhibit. Inspired by the Mister Rogers Factory Tours, at first glance, it seemed slightly boring for my youngster.

This area is great for older children who want to make hands-on creations. In this exhibit you can see how a Louisville Slugger bat is made, die cut an object, melt wax to make a crayon or deform a wire to make a spring. There are molds of playground balls, wheels and shoes. I was bummed that the machine showing the process how to make a spoon was out of order.

Running the Numbers, an American self-portrait, is an eye opening look at the negative behaviors in our society through art. A portrait of toothpicks displays the number of trees cut each year in the U.S. to create junk mail. The display illustrates the harsh consumption of stuff that is killing us and our environment. It is really eye opening and perfect for older students and adults.

Learn about maritime life downstairs at the beach exhibit. Highlights include a miniature version of King Neptune (the real one is at Virginia Beach), examples of ocean life, a David Hasselhoff-like lifeguard station and a game of tic-tac-toe crabs. Outside, you can see the Aluminaut, the world’s first aluminum submarine.

I could have spent all day in the Journey Through Life exhibit. Walk into a giant microscope and shrink down to explore cells and DNA. The Cells at Work area is fascinating. Turn the wheel to see different cells, how bacteria play a role in our life and how chromosomes can identify the sex of a baby. Other interactive tools include the cell explorer videos which illustrate the parts of a cell and their interaction with the human body. Food and nutrition play an important role in the development of cells. Examples of healthy versus junk food and the importance of drinking milk are the tip of the iceberg. Hands-on experiments like Down the Hatch show how the digestive system breaks down food to convert it to cell energy.

Bones in Motion is a skeleton shows how swivel joints aid in wrist movement. You can also step on pedals to watch how saddle joints in the ankles allow the body to move up and down, left and right. Ever wonder how your brain can react so fast to stimulus? Try the experiment by placing your hands on the pads. Electric signals in your spinal cord react to neurons in your hands when they feel movement.

Another favorite was an exhibit on movement. Kids can stand and spin or watch bowling balls to learn about speed and momentum. Sharing this exhibit floor is an area about space. Step on a scale to find out what your weight would be if you lived on another planet in the solar system. We would weigh less on Mars and twice as much if we lived on Jupiter. Fascinating! At the Launch Pad, you can push a button to make a rocket blast off.

Science Unplugged is the place to be if you are into architecture, construction, or engineering. Learn how to make a cantilever without it tipping, lift a 100-pound weight with a lever, or build a Roman arch out of foam blocks. There are plenty of activities here to draw, build, create and learn using science.

Exhibits and Admission at Science Museum of Virginia

The gift shop is very cool with books and activities on science, astronomy, anatomy kits, crystals kits and even fossilized dinosaur poop! There is a cafe and bathrooms with changing stations.

Things we missed were riding a Segway and the video of rats playing basketball. There are also labs with live animals and ones showing the dissection of a cow eye – eww! Throughout the day, Live Science programs include a game of Astronomy Jeopardy and experiments using liquid nitrogen and static electricity.

While it is expensive to see the museum, it is huge and there is so much to see and do. We opted for the exhibits only and felt we got our money’s worth. You need at least three to four hours to see everything.