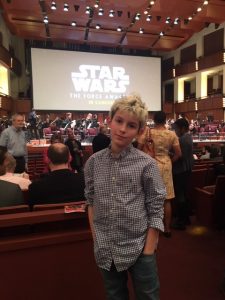 Star Wars and the National Symphony Orchestra may not seem like a natural fit, but any fan of the Star Wars franchise should make it a point to see The Force Awakens accompanied by live music at the Kennedy Center.

My husband who has seen all of the Star Wars movies several times wasn’t sure that the experience would be any different than seeing the movie on the big screen – but he was wrong.  The Force Awakens has an Oscar-nominated score which is greatly enhanced when played live, making the film even better and creating a truly magical experience.

During the performance, the orchestra plays in front of the screen, rather than in an orchestra pit, so it’s impossible to ignore that the score is being played live.  Although we were initially concerned this would be distracting, it actually added to the experience and made us more aware of how integral music is to the Force Awakens being such a great movie.  I’m sure the same could be said for the other movies in the Star Wars franchise.  Although my son had seen the Force Awakens at least three times before, he said he had not realized how much music was in the movie before.

It’s always a great experience to see a favorite movie on the big screen, but seeing a great movie accompanied by talented world-class live musicians is another experience altogether.

If you want to get the full Force Awakens experience we highly recommend seeing this performance.