When I researched online for information about Temple Hall’s Corn Maize and Fall Festival, I was underwhelmed.  I predicted that it would be like several other commercial festivals I have been to before.  The minute I drove the family car onto the property, Temple Hall Farm Regional Park exceeded my expectations.

My Experience at the Temple Hall Farm 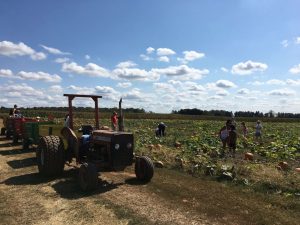 painted pumpkin bales settling in for Halloween?  Cars by the masses were parked along the land, while colored banners directed us to our destination.  The ticket booth sits past the entrance to the farm making it a little awkward to access.

A little kissy wissy never hurt anyone when it’s given by a Dromedary camel.  I heart Sampson.  Heck, I heart Eli and Will also.  Will, who is the adoring owner of Sampson and Eli, two camels that are temporary farm residents, was one of the nicest “farmers” I have ever met.  I barraged him with questions about the fuzzy animals.  After my daughter hitched a ride on 7 year old Sampson, it was my turn.

Animals at the Farm

I was hesitant that I would hurt the one humped camel, but Will reassured me that these camels can hold 40% of its own weight which is the equivalent of 500 pounds.  Hailing from West Africa, Dromedary camels are predominantly used for riding, so you need not worry about harming these large creatures.  When I sat on the camel, I got the biggest rush 14 or so feet off the ground!  I mean, how often can you say I rode a camel?  And of all places, in Virginia?  My daughter loved it, but I was the big kid at heart.  For $6 a ride and $1 a carrot, it’s totally worth it.

After her high, it was darling daughter’s turn to hop of one of three bouncy houses.  One is designated for the under 6 group, while the popular one was the slide version.  Bounce on over to the spider web or duet of jumping pillows, which is a mandatory fall festival tradition.  I was happy to see employees monitoring both areas.

Fun for the Kids

There’s a neat hay tunnel mountain with slide enrobed by the corn field or a barnyard theme version with additional slides and swings.  The trio of bouncy horses were sad because their heads were deflated, but the adjacent duck races and corn house were big hits with the younger set.  Snap a photo in the enormous picnic chair while you listen to live music.

Warm your tootsies or purchase a s’mores kit from the snack stand and roast them over the campfire.  We saw several families enjoying camaraderie around the two fire pits.  Other eats include two stations serving up burgers, corn dogs, fries, and funnel cake which can be enjoyed under the large picnic pavilion.

The country store stocks local fruit, veggies, eggs, honey, their own brand of jams and butters, bottled drinks, and pumpkins.  For the trick-or-treaters, they sell canvas bags, glow sticks, flashlights, pumpkin bobble headbands, mini slinkies, and nostalgic candy.  You can’t leave without a cow tail!  One dad was a trickster setting off a pumpkin whoopee cushion in the store.  My trickster husband had to comment about it.  Hilarious dialogue ensued between parents and kids!

Corn Maize at the Farm

Temple Hall touts itself as having the largest corn maize 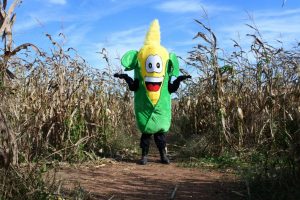 on the east coast clocking in at 24 acres.  I love the 2014 maze theme, “Buy Fresh, Buy Local.”  There are pictures of trees, along with a horse, pig, and cow that reads “Join The Moovement.”  Placed on a random chair outside the maze are clue sheets which we didn’t see when we entered.  The terrain was well paved, but with the recent rain, some stalks and large rocks were on the ground.

We passed each “passport” station marked 1 to 14.  After the third station, we started to get disoriented.  My 7 year old wanted to race through because she was afraid she’d get lost if she couldn’t find a human within sight.  Shamefully, she had us cheat our way through so she could follow the laughter of other groups.  The autumn breeze felt great and the maze provided us with some great family bonding time.

While we wanted to take the hayride to the pumpkin patch and ride the cute, spotted cow barrel train, the animals in the distance caught my attention.  Temple Hall Farm Regional Park is a 286-acre working farm in Loudoun County.

There are a plethora of animals to adore.  When I mean plethora, I don’t just mean that there many kinds of animals.  They are dozens of Dutch rabbits, Jacob sheep, Kiko goats, Belted Galloway cattle, Hereford and Hampshire pigs, Percheron horses, Welsummer chickens, ducks, free roaming peacocks, peafowl, guinea fowl, a pair of barn cats, and a Poitou donkey. 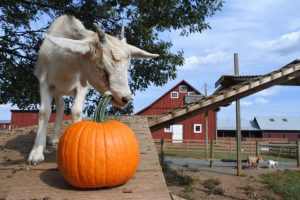 A large gathering of turkeys followed people around aimlessly.  Initially this frightened my daughter, but then I told her they were just looking for love.  The male turkeys puffed out their feathers which ensued in back and forth gobbling with their female counterparts.

For 10 minutes, I watched my daughter be the chicken whisperer.  Picture this, the chicken squawks once.  My child reacts with the chicken dance and a “bock, bock!”  The chicken was obviously happy that she paid attention to him because the goats and sheep could care less.  While those large bags of kettle corn are tempting, refrain from feeding the animals.  Be warned, the friendly donkey likes to nibble on your hand.

Stop inside the barn to see examples of crop farming machinery and the pens where livestock is kept.  Temple Hall is a fantastic education tool, preserving the agriculture of Loudoun County.

Temple Hall Corn Maize & Fall Festival operates Friday and Saturday 10 am to 6 pm, and Sunday 10 am to 5 pm.  They are open Columbus Day, along with November 3 and the season finale on November 4.

Temple Hall Farm Regional Park is open during the spring and summer on a different time schedule.  My family has already requested we return again and I’m curious to see what it’s like minus the fall fanfare.  Do I think the price is worth it?  100% yes!