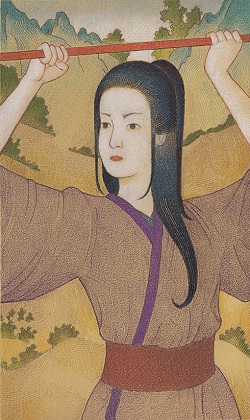 To recap the story, in ancient China each family must send a male to fight in a war.  Some families are able to send young boys with no strength and some can only send old men.  In Mu Lan’s family, the only male in the household is her old, frail father.  Her father is willing to go to war, but Mu Lan decides that even though she is a girl she is more capable to go to battle and decides to take her father’s place – disguised as a boy.

It is not easy for Mu Lan to keep her secret, or to prevail in battle, but Mu Lan eventually finds her footing and wins the war.  However, her glory is short-lived because she is outed as girl and brought before the Emperor to receive her punishment for daring to be a girl who has gone into battle.  However, the Emperor turns out to be more open-minded than most and offers Mu Lan anything she would like in exchange for her heroism.  She chooses a fast horse to go home to see her father.

Unlike most stories that feature women, I really liked that there is no romance in this story.  While most similar stories may have ended with the Emperor kissing Mu Lan or asking for hand in marriage, I really appreciated that Imagination Stage steered clear of this type of cliché ended and instead ended with the promise of Mu Lan becoming a General in the Chinese Army one day. I also really liked that Imagination Stage uses traditional Chinese theatre methods, inducing the use of drums and typical Chinese costumes, to tell the story rather than trying to Westernize the story too much.  I thought it was a great way to expose my children to new and different cultural experience without having to venture too far from home.

Any fan of Disney’s Mulan should know that this is not a retelling of the cartoon movie.  The tale of Mu Lan is an ancient Chinese legend that has taken many different forms over the years.  After the play, my eight-year-old daughter, who had read the Ballad of Mu Lan in school, informed me that the play also varied from the book.

My children and I really enjoyed The Ballad of Mu Lan!  It’s a great tale of girl empowerment that has stood the test of time!  Don’t miss this chance to see Mu Lan come to life.