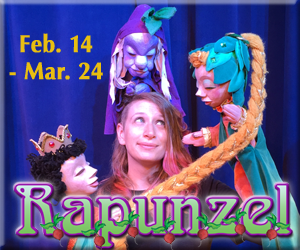 One word of caution about taking your children to the Puppet Co. Theatre:  There is a real chance that they may become puppet groupies.  My four year old has been going to shows since he was about two and regularly asks if we can visit the puppets.  At the showing of Rapunzel we went to, a little girl next to us asked her mother to read her the Puppet Co. Playhouse’s schedule for the rest of the year and asked her if she could come to see each and every one. Given the Puppet Co. Playhouse’s consistently good and witty productions, her sensible request deserves to be met.

As with all The Puppet Co. productions, don’t expect to see the predictable tales of the Disneys out there. The Puppet. Co. always brings a twist!

This version of Rapunzel begins with a elderly man and his wife who have longed for children for years but assume it will never happen for them. The man and his wife live next door to a lush garden filled with a species of radish called Rapunzel. (Incidentally, it is a real type of radish.)  The wife loves Rapunzel radishes, so the husband sneaks into the garden to steal some for her.  Eventually, the owner of the garden, who is a witch with magical powers, catches the man in the act.  The witch makes a deal with the husband that he can have as many radishes as he wants, as long as he agrees to give her their first-born child. Resigned to the thought that he will never have any children, he makes the deal.

As it turns out, the couple finally bears a child, which they name Rapunzel. As in the traditional version, the witch takes baby Rapunzel and locks her in a tower with no contact with the outside world until she is eventually discovered by a prince who rescues her.

Throughout the show, there are jokes that cause the children to erupt with laughter. There are even opportunities for the kids to sing along with the characters. The play is masterfully performed by puppeteer Elizabeth Dapo, who plays every character.

The 40-minute show is just right for younger audiences.  After the show, be sure to stick around for a photo op with a puppet and the puppeteer!

My son remarked that puppets like it when people visit them so everyone should go see the puppets: 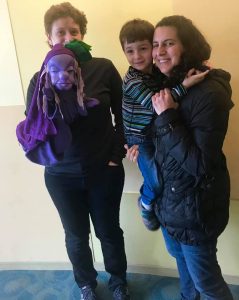 Tips for Your Visit: