The tradition in my family has always been to trick-or-treat in Old Town on Halloween night.  Due to the popularity of the event, I opted to find something less crowded and with a different twist on All Hallows’ Eve.  My curiosity sparked when I read that Mount Vernon would host a Trick-or-Treating event at the estate. 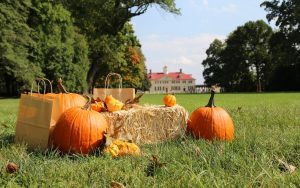 friendly activities.   After attending Mount Vernon by Candlelight couple of years back, I am continually impressed with the number of special events held throughout the year.  So much so, that I think I need to invest in an annual pass to get my history fix.

Given that Trick-or-Treating at Mount Vernon was an annual event, the estate left no cauldron unturned.  Treats, bubbling brew, and a bevy of costumed characters made the late afternoon Halloween event a howling good time.

Large crowds were waiting when the estate opened at 3:30 pm.  After surrendering our tickets, we made our way through the lobby where children can collect souvenir goody bags containing picture symbol “tokens,” to be exchanged for treats, a map of the property and schedule of events.  After that, families dispersed on their own to explore the estate.

First stop was a wagon ride on the 12-acre field.  Led by horses Henrietta and Lydia, I was disappointed that the ride didn’t even last 5 minutes.  Hopefully next year, the rides will be a bit longer.  After you get off the wagon, don’t forget to pick up your candy.

There were so many treat stations that I’m not sure if we made it to each one.  All I remember is that my child’s bucket was so heavy that it’s a good thing I had a big bag to put them in.  We didn’t know about the tokens until after visiting two areas.  Each station had two buckets filled with treats.  Hand in the specific “token” or picture card and choose a treat from each bucket.  Being that this was an educational history of how much President Washington enjoyed children, it’s no wonder Mars was the sponsor.

Then it was off to Bowling Green, which is the grassy, open area in front of the Washington’s house.  Throughout the entire event, the staff not only dressed in colonial attire, but also kept their accents when communicating with visitors.  Colonial games like Game or Graces and hoop rolling were played, while storytelling was held in the straw bale made amphitheater.

Robert Mouland, better known as President Benjamin Franklin, was a delightful entertainer.  He played music while moving a wooden puppet strapped to his leg.   Children were mesmerized by the dancing figure.

From Bowling Green, we found ourselves spending most of our time in the Historic Area. 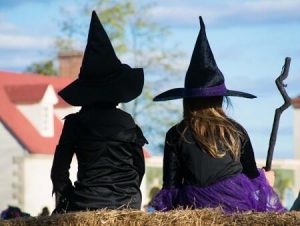 At the mansion’s piazza, costumed children were hugged and admired by Martha Washington.  Several of the buildings were open for viewing such as the overseer’s quarters, salt house, wash house, smokehouse, coach house, stables, and slave quarters.

By far, the most comical area to collect candy was outside the Dung Repository!  Guests could engage in wool carding, fish net making, and watch spinning and blacksmith demonstrations.

In a tent to the side of the mansion, we were given a brief history of chocolate making along with a demonstration of how the bean is ground using a mortar and pestle, smoothed into a paste, and turned into liquid.  Excited to taste a sample of the American Heritage historic chocolate drink, we were warned it’s bittersweet, which tastes similar to dark chocolate.  The kiddo wasn’t impressed, but, after all, this was chocolate in colonial times in its purest form.  Children received a coloring page to take home.

In the Upper Garden, lines formed inside the greenhouse where a Halloween craft took place.  Due to the limited amount of room, guests trickled in four at a time.  An employee helped children make a creative George Washington Ghost Lollipop.  The Tootsie Pop wouldn’t be complete without a colonial hat.

The activity was simple because most of the supplies were prepped in advance.  While the musician didn’t play “Monster Mash” children happily accompanied members of Washington’s staff in 18th century set dancing.

Save the date for 2021 and head to Mount Vernon for Halloween Trick-or-Treating.  There are plenty of festivities to make this a definite Halloween must-do for families.