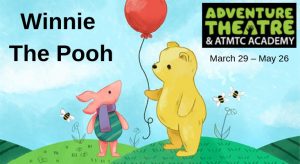 Winnie the Pooh is a classic character that has been embraced by generations of children for good reason. Pooh and his friends are lovable and relatable to young children. Adventure Theatre-MTC brings Pooh to life with warmth, authenticity, and humor. When entering the the theatre, your may have to restrain your child from running on the stage. Adventure Theatre has created a world any child would love to enter, complete with a swing, sandbox full of colorful toys, a hollowed-out log used as a tunnel, and a dream tree-house.

In Adventure Theatre-MTC’s version, Pooh joins his friends Piglet, Roo, Owl, Rabbit Kanga, Eeoyre and Christoper Robin on several adventures in 100 Acre Forest.  You may want to tell your child ahead of time that Tigger is not in the play since the stories presented during the play are based on early Pooh stories before Tigger was introduced. Throughout the play, Piglet tries to avoid being washed, a scheme is hatched to fool Roo, Eeoyre is depressed because not only has he lost his tail but no one has remembered his birthday, and everyone is concerned about a Heffalump. Of course by the end, everyone is happy – including Eeoyre.

The play is a fun, fast-paced musical that had several kids (and even one adult) leaving the theatre singing songs from the play. My son declared that his favorite part was “All of it!” and was only disappointed that he was not allowed to play in the sandbox used by Pooh and his friends during the play. Seeing Winnie the Pooh come to life is a special experience for anyone who loves reading about Pooh in books or seeing him in movies.