This review is of two plays, Zomo the Rabbit:  A Hip-Hop Creation Myth and Thumbelina because they are showing in repertoire at Imagination Stage.  This means that the shows use the same actors on the same stage with alternating performances.  Both plays are excellent, and it is truly amazing to see how such different shows can be created using the same place and people.

If you can take your children to see both it is a great opportunity to showcase how much work and thought goes into putting on a play.  The range of acting and creativity in using costumes and the same stage and basic set to create two extremely different plays is something worth experiencing.  However, if you can only make it to one play they are both well worth seeing on their own. 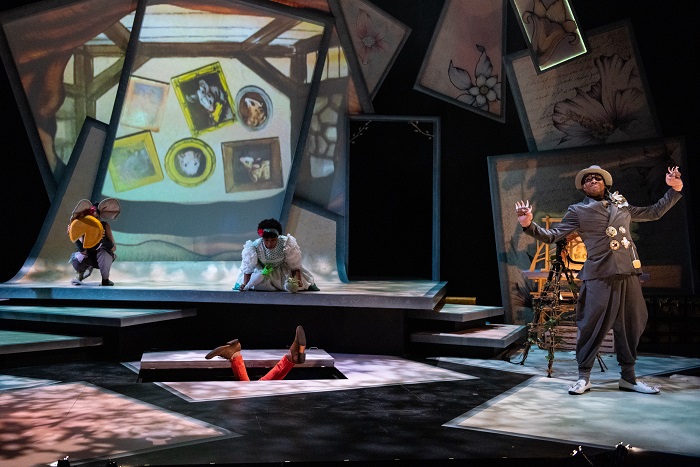 It’s rare to find a play that truly has it all from Oprah to dance lessons to the DC metro.  Zomo the Rabbit has it all.  In this story based upon a West African tale about a trickster Rabbit. In the tale Zomo is rejected by the other trickster gods, Raven, Reynard the Fox, and Anansi the Spider, so he goes to Sky God for help.

The Sky God tells Zomo that if he manages to get three items she will give him power. Zomo then goes on a quest for the three items the Sky God wants: Big Fish’s light-up dancing shoes from the Southwest Fish Market, Wild Cow’s spray paint cans from the National Zoo, and Leopard’s turntable from her Adam’s Morgan apartment.  He is skilled at both trickery and running fast and, after overcoming some obstacles and interrupting the Sky God’s yoga class to get her guidance, Zomo gets all three items.

Then, on the cusp of getting power and acceptance from the other Gods, Zomo has a change of heart and realizes that he should not have taken the other animals most prized possessions.  He decides to return the dancing shoes, spray paint, and turntable to their owners and forego power.  The animals all become friends again and combine their powers, rap, dance, art, and DJing to celebrate Hip-Hop. 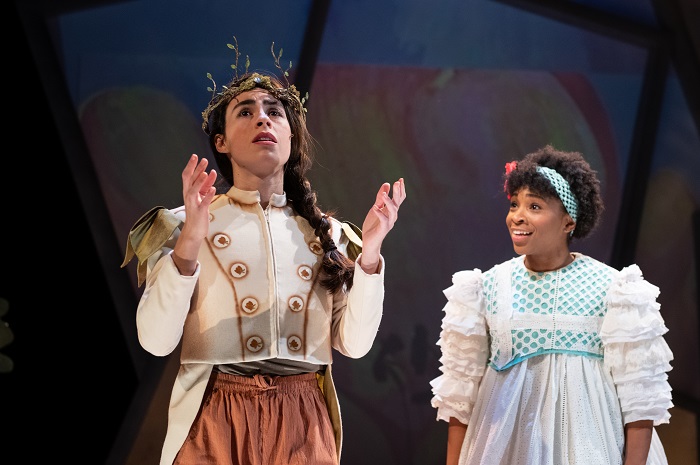 My kids, aged five through 9, loved the play.  They especially liked the dance lessons they could do right from their seats to become a part of the play.

Thumbelina is an adorable play that combines a retro-feel reminiscent of old silent films with modern-day touches including an extended scene set to techno music.  For those not familiar with Thumbelina, it is the story of a tiny, tiny girl who goes to live with an Old Woman who has wished for a small child to care for.

As Thumbelina grows, she becomes curious about whether there are others like her.  With the help of the Swallow, she goes out into the world to find out.  Along the ways she encounters a frog, a mouse, an evil Mole, and other creatures.  Eventually she does find her people and discovers that she is a Princess.  The feisty Thumbelina, however, is not content to simply live happily ever after and insists on being able to write her own ending, which includes making an annual trip with her new friends to visit the Old Woman who raised her.

Thumbelina is a play unlike anything I have seen before.  It incorporates not just live actors, but also different kinds of puppets, including marionettes, shadow puppets, and hand puppets, to tell the story and create the scale necessary to show how small Thumbelina is compared to average-sized humans and convincingly show her adventures.  A large screen projects much of the action so that everyone can see the small players well.

When the play was about to end one young theater-goer yelled “No!” to express her displeasure that the story was reaching its conclusion and she would have to leave.   This is a unique experience that children and adults alike will love not just because it is so different, but because it is executed so well.