My kids and I got as close as we probably ever will to being in the circus. Inside a circus tent, with only one ring of performers and no seat further than 16 rows away, the Big Apple Circus really makes you feel like you are part of the action. While we weren’t among the lucky (unlucky?) audience members to get pulled into the ring by a clown, we did get to join him with clapping, a silly song, and passing a giant ball around. And we definitely had the feeling that we were an arm’s reach from some pretty cool feats. 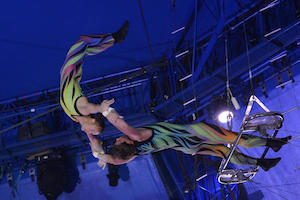 Set up in an empty lot a 10-minute walk from the Dulles Town Center Mall, the giant white tent has a different feel than seeing a show in the Verizon Center or other large performance venue. There’s a live band on an elevated platform next to the ring, and stepping out for the bathroom or to buy snacks doesn’t mean going very far.

The show’s theme, Metamorphosis, is loosely reference throughout the show with the ringmaster talking about transformations, and a performer at one point receiving costume wings. But really, the show is a series of circus acts. From a pair of contortionists squeezing into a tiny clear box to horses galloping around with goats on their backs, there are lots of risky and how-do-they-do-that? moments.

There are drawbacks to the intimate, tented theater-in-the-round style show. There were times that the performers’ backs were to us, and times when a spotlight shone right in our faces. A shower of hand chalk rained down on us as we contorted ourselves in our seats in an effort to watch the trapeze artists directly above us. The temperature is 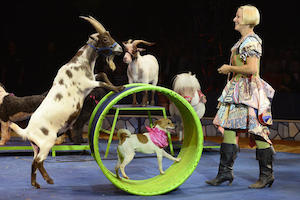 controlled for hot or cold temps, but we were warm in the first half and comfortable in the second.

In between about 10 major acts, there was lots of banter by the ringmaster, goofiness by the clown, and smaller bits. There are displays of strength, balance, rhythm, flexibility, and magic. My family is still trying to figure out how one woman’s clothes were changed a dozen times when a cloth was dropped around her! My crew liked seeing the contortionists best (“They must do a lot of yoga,” declared my five-year-old), with the diabolo performers coming in second (they have two sticks attached with string and throw and catch an hourglass-shaped object). The animal act in the first half of the show had some cute tricks (the ringmaster pointed out that some of the animals are rescue animals, and the circus doesn’t seem to come under much flak for treatment of animals). We were least enthralled by a second animal act that had pairs of horses, camels, ponies, and llamas mostly going in circles (I don’t doubt it’s hard to train those animals but it dragged on and lacked the wow factor of other acts).

Being in such a small venue with just one ring to focus on, the Big Apple Circus manages to not be overwhelming while still providing a ton of thrills. It’s great for all ages – from a first-circus run with little ones, to a special outing with older kids who can really appreciate the physical feats.