If you are looking for a fun day trip, not too far from the DC area, then a visit to the Shenandoah Caverns might be a great choice. On a 70 degree spring day we traveled to the caverns and it took us 2 hours from Arlington. The trip was a pleasant one, traveling down lightly trafficked roads through the rural areas.

The Shenandoah Caverns are smaller and have some different features than Luray. Shenandoah doesn’t get the big crowds like Luray does and is not as commercial.

RELATED: 35 Best Things to Do in Luray Virginia (Not Just Caverns)

We saw some really beautiful stalactites and stalagmites and it is a cool 56 degrees in the caverns year around, so bring a coat or a sweater regardless of the weather outside. The tour, led by a guide who explained how the structures were formed and how the caverns were discovered, took about 1 hour.

There is a nice gift store that you can visit before/after your visit that has precious gems and rocks for purchase along with other trinkets and snacks. What made our trip memorable was not just the caverns but visiting the other on site activities. Tickets to the caverns also give you entrance to the American Celebration on Parade, the Yellow Barn and the Main Street of Yesteryear. 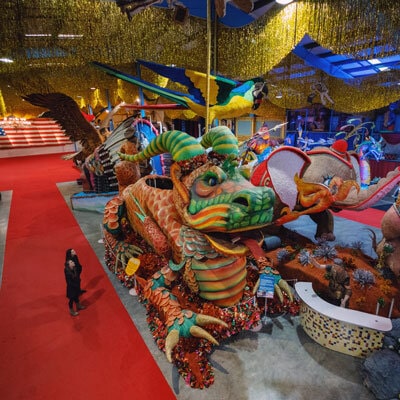 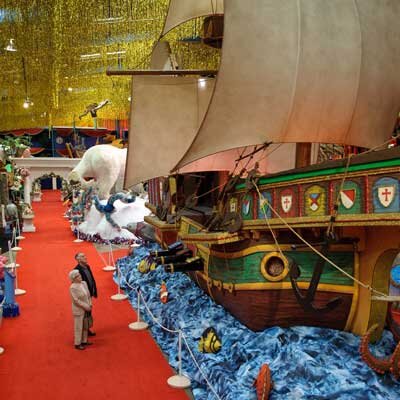 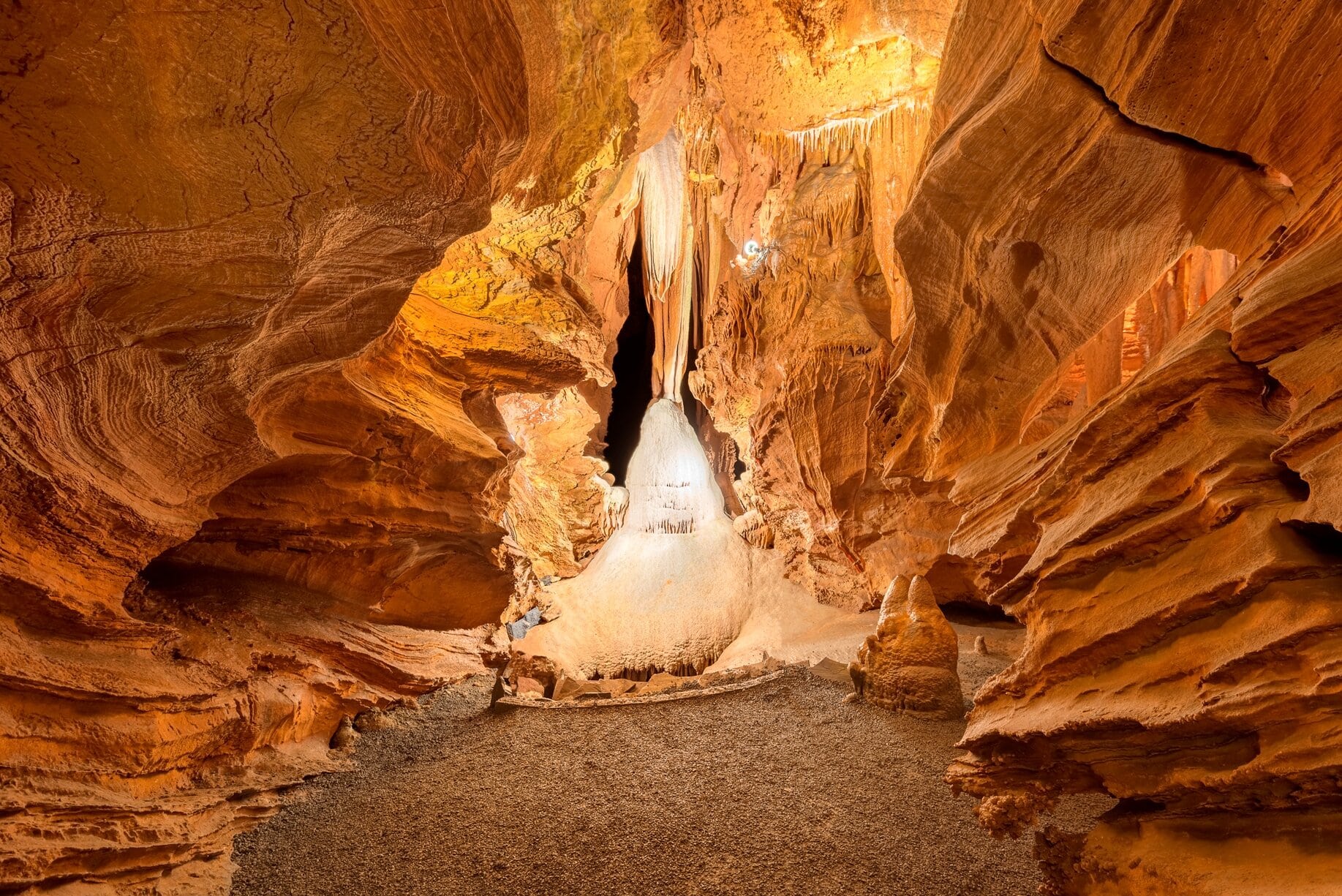 The person at the ticket area never told us about the Main Street of Yesteryear, so we unfortunately missed it. It is in the same building as the gift shop and where you purchase the tour tickets. Main Street of Yesteryear I am told is on the second floor. It is a collection of old window displays like the ones you would have seen at big department stores long ago. I think it would have been worth seeing. My son loves to climb and a trip to the Caverns did not disappoint. Outside the caverns, there was a huge dinosaur replica made for climbing. There were also other climbing structures throughout the property.

If you drive down from DC and take the cavern tour, you’ll soon be hungry. For lunch there are a few options. If you pack a lunch, there are picnic tables up the hill from the caverns you can use. The grounds are pretty, so it would be nice to be outdoors on a beautiful day.

I’m told that the Shenandoah Caverns does serve lunch from Memorial to Labor Day at their Caverns Café located next to the gift shop. It is a 1957 soda fountain themed café serving burgers and fries.

The food was “okay.” The drinks were cold and refreshing. The service was friendly. The store had a tiny eating area, so depending on the size of the group and weather outside, you might want to take your food to go. There is a playground outside and some more climbing structures, which our kids had fun playing on. 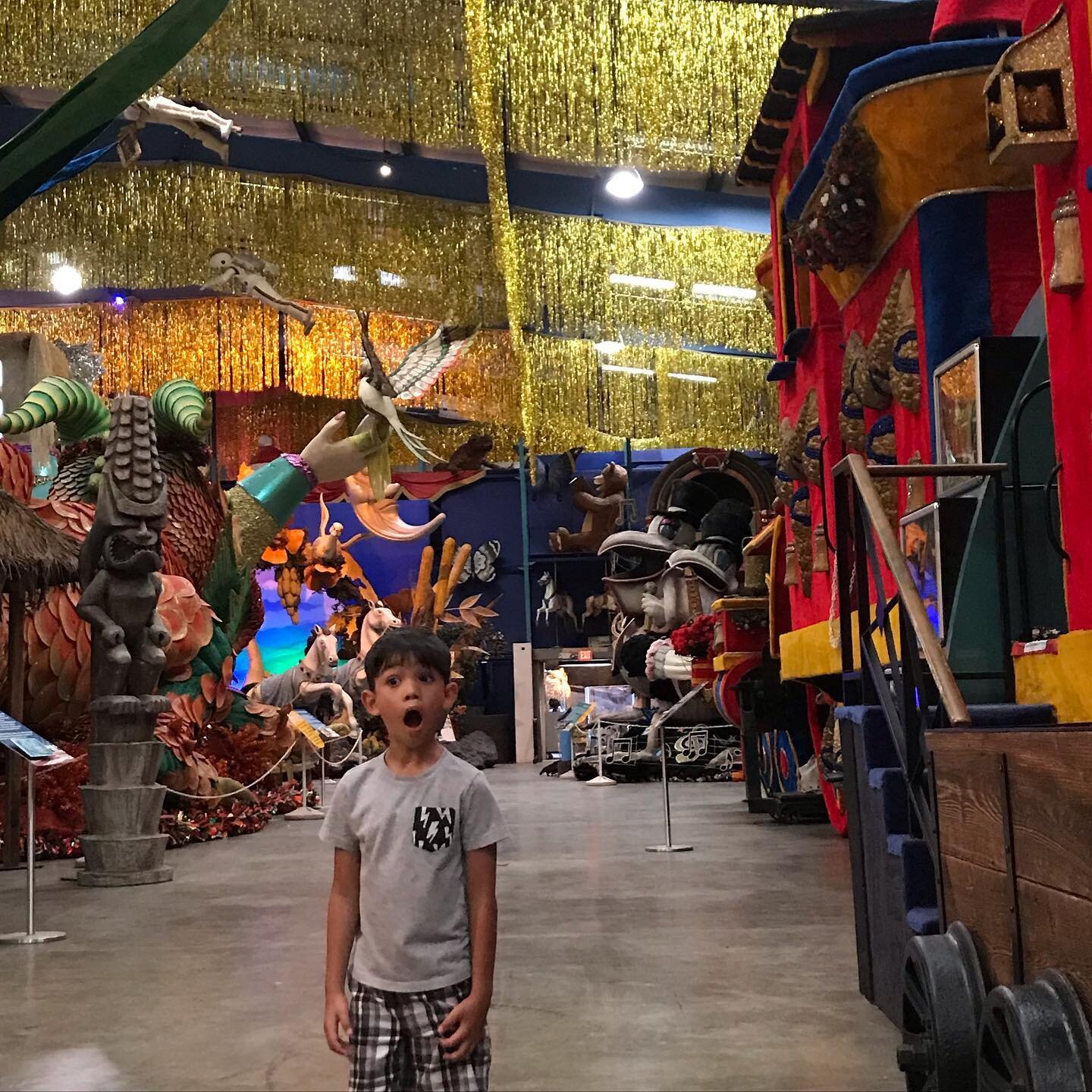 For a sit down meal with a more extensive menu, we were referred to Southern Kitchen which is about 10 minutes drive from the caverns and is known for their fried chicken. Southern Kitchen is 5 miles away in the town of New Market. We decided not to go there as the kids were really hungry and we wanted something fast. We also wanted to stay close to the caverns since we still wanted to see the American Celebration on Parade and the Yellow Barns.

Besides the caverns and playing on the climbing structures, we really enjoyed going to the American Celebration on Parade attraction. In a huge building there were over 27 award winning parade floats from the Rose Bowl and Thanksgiving Day Parades and Presidential Inaugurals.

Some of the floats creatures could be animated by the kids pressing big red buttons. It was a great place to get some photos with the kids. Everything in this place is big, including the train display in the lobby. The American Celebration on Parade building has a gigantic replica of the Statute of Liberty out front, so it would be hard to miss.

Across the street, with the big friendly frog outside, is the Yellow Barn which sells locally produced honey, Virginia wines and country themed items. It also has restored antique farm equipment. During the year, the barn hosts Country Jamborees, weddings and birthday parties.

To the right of the Yellow Barn are some cages with goats, chickens and rabbits. The chickens were roaming free and provided lots of entertainment. There is a machine that you can purchase a handful of grain to feed the animals for 25 cents.

If you are visiting Monday to Saturday, you can also take a trip to the Route 11 factory (read the Our Kids review), which is nearby to the Shenandoah Caverns. Our visit was on a Sunday, so the Route 11 factory was closed. The historic Meems Covered Bridge is also nearby but we didn’t have time to visit this trip.

Our day trip to Shenandoah Caverns was really enjoyable and made for an easy, educational and fun filled day. This trip could be easily be extended to a weekend trip since there were wineries and other civil war sites to be seen along the way. Admission to Caverns (includes admission to the Yellow Barn, Main Street of Yesteryear, America Celebration on Parade) is $28 for adults; $25 for seniors 65+ and $14 for children ages 6 to 12. Children under 5 are free and there are discounts for groups. 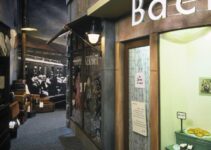 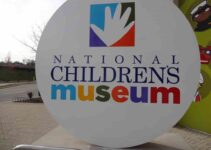 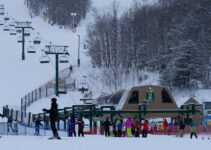