Though it’s advertised as “not so scary,” the Eye Spy Halloween Train could really be called “not at all scary.” Aimed at kids under 8, the Cabin John Miniature Train ride makes for a sweet (yet, no candy!) outing with tots.

Eye Spy Trains are back for Halloween 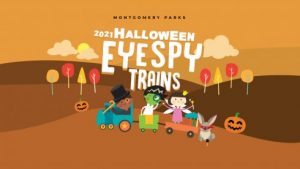 With the train’s popularity, I’d recommend buying tickets in advance to avoid arriving to find it sold out. We weren’t sure of our schedule on a recent Saturday so decided to just show up at 4PM. When I had checked online earlier in the day, there were plenty of tickets available. But when we arrived at 4PM, the train was sold out for the day. I rushed home and bought tickets online for the next day rather than wait there behind 10 other people buying advance tickets in person. There is no service fee or price difference for buying online versus in person.

We returned on Sunday for our ride and got in line about 10 minutes before our 1:30PM departure time. There were about 15 people ahead of us, and boarding began right before our departure time. The train station is all decked out for Halloween, with colored lights, straw bales, pumpkins, two large inflatables, a couple pop-your-head-through-the-hole photo ops, and lots more decorations. There is a lot to look at, including several kids dressed in costume, which kept kids entertained while in line.

After handing in our receipt (printed from online), we were given a 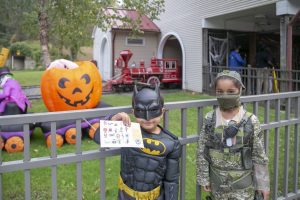 scavenger hunt card with pictures of 16 things to spot on the route. There are way more than 16 objects placed in the woods, and there are several of some of the pictured items. My husband helped my 4-year-old find and check off the scavenger hunt, while my 8-year-old didn’t want much help from me with his card. From stuffed animals (such as Elmo, a pink poodle, and a tiger) strewn amongst leaves and branches to painted wooden figures (such as a ghost, a pumpkin, and a caterpillar) tacked to trees, there are more than a few dozen discoveries to make as the train snakes through the woods. Constant shout outs by parents and kids made for a somewhat noisy ride, but no one seemed to mind. The train doubles back over the same track for a good part of the trip, so things initially missed might get noticed later.

Our daytime ride did not include anything scary, though I suppose a ride in the dark could feel slightly more so. I noticed flashlights dangling from the train railing at each seat, which must help with trying to find scavenger hunt objects in the dark. Though the ride is billed as being for kids under 8, both of my children had a great time. My 8-year-old has also been on the Haunted Train and Creepy Carousel at Wheaton Regional Park in past years, but loved the challenge of trying to check off as many pictures as possible.

After getting off the train, we checked out the party room, where there are tables set up with simple sticker and coloring crafts. And a few rows of chairs are set up outside with a small movie screen showing kid-friendly Halloween flicks (such as Thomas the Tank Engine and Casper the Friendly Ghost).

Before heading home, we of course made a visit to the fabulous playground that’s a short walk from the train area.