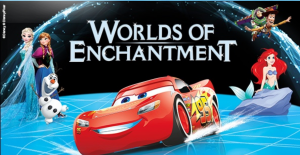 Rev up for non-stop fun with four of your favorite Disney stories with Disney On Ice presents Worlds of Enchantment!  This action-packed ice spectacular showcases beloved characters from Toy Story 3, The Little Mermaid, Cars, and Academy Award-winning Frozen.

The show opens with Mickey, Minnie, Goofy and Donald Duck getting everyone ready to see the show. 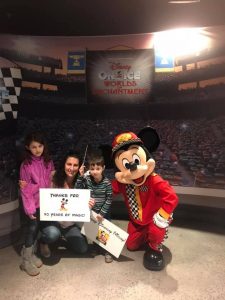 Next, the characters from Toy Story 3 take to the ice. My family loved the crowd favorites: Buzz Lightyear, Jessie the Yodeling Cowgirl and Woody. Along with them Barbie, Ken, Ham the Pig, Rex, the entire battalion of army men, Slinky the pig and so many more toys appeared exaggerated on skates, trying to make it back to Andy’s house from Sunny Side Daycare.

Suddenly, The Little Mermaid‘s Ariel takes to the ice and the audience watches as evil Ursula steals her voice. Ariel quest takes her out of the ocean and into love with Prince Eric.

Then the cars from Cars jump in. It’s a departure from the typical Disney on Ice performances because there are no figure skaters. Instead, just as in the movie, the performance is carried out completely by cars (including Mater, the lovable tow truck) which I assume are enormous remote-controlled vehicles. My four year son could not have been more delighted to see Lighting McQueen and Tow Mater driving around the ice in real life.

Finally, Elsa and Anna skate in to tell the story of what happens when the Queen accidentally freezes Arendelle, leading to a lesson about the meaning of true love. My son loved seeing Olaf, and my daughter enjoyed singing Let it Go along with three-quarters of the fandom.

Each of the four performances is a mini-version of the movies on which they are based. They may miss some details, but the beginning, middle, and end of each story is palpable.

This production of Disney on Ice is truly a magical experience for the entire family.  While some Disney on Ice productions are Princess-centric, Worlds of Enchantment truly does have something for everyone. Disney on Ice not only showcases incredible skating talent, but also brings fantastic special effects like indoor snow and fireworks.

From wheels to waves, icy wonderlands to infinity and beyond, see some of your family’s favorite Disney moments come to life in Disney On Ice presents Worlds of Enchantment!

Getting There:  There are four metro stops located near the Capital One Arena making it accessible from the Red, Yellow, Greet, Orange, and Blue lines.  The Gallery Place-Chinatown station is located directly at Verizon Arena (Red, Yellow and Green lines).  Judiciary Square (Red line), Metro Arena (Red, Orange and Blue lines) and Archives-Navy Memorial Penn Quarter (GreeRn and Yellow lines) are within walking distance.  Parking for the event is available at the Capital One Arena but there are several garages within a few blocks that charge much less.  There are metered spaces surrounding the Capital One Arena, but demand for parking is high and many spots allow for only two hours of parking so plan your time accordingly.

Strollers:  There is stroller parking in various locations within the arena.

Get there early:  Get warmed up for the show and be your best with exclusive moves taught by the mouse that started it all during Mickey’s Dance-Along Pre-Show.

Attire: Dressing up as you favorite Disney character is encouraged!

Running Time:  About two hours, including an intermission.

What to leave at home:  No outside food or drink is permitted.  Leave cameras with detachable lenses, tablets and all other electronics besides cell phones at home.  Bag size is technically limited to 14x14x6 but reports are that diaper bags of any size are allowed in.